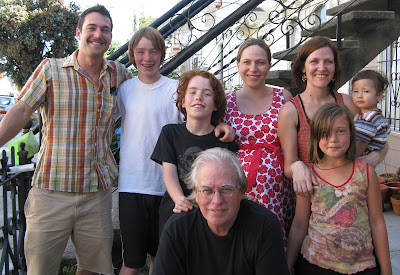 In so many ways, 2008 sucked. Most of us have never experienced a year of such economic dislocation and financial disruption. But, still, we also collectively elected a great President, IMHO, and continued to sustain our beloved families. 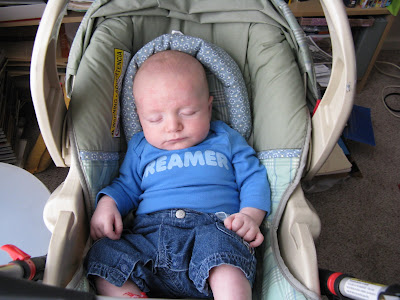 I was blessed by the arrival of a new grandson.

And the delightful growth of my first grandson.

As this year ends, the Weir clan is thrilled that a third grandchild has just today been confirmed to be on the way! (S)he appears to be on track for a late summer arrival...

As the grips of a giant vice close in on me tonight, as they are doing on many Americans, I cannot help thinking back to a happier time, when my second son came into this world, 14 years ago. Today, he is a tall, gifted athlete, a young man with exceptional social skills and a dreamboat to many young girls who know him.

Then, he was merely a baby I swirled around in my arms while we danced to this song, then his favorite.

I wonder if, deep within his consciousness, he remembers these times?

If it was only about numbers, this economic "correction" would be interesting. The daily fluctuations in stock indices, currencies, commodity prices, and other markers create a set of mathematical patterns that I, for one, find fascinating, albeit in a gruesome sort of way.

But, setting aside all of the theoretical aspects that stimulate curious minds, the state of our hearts is another matter.

As politicians like to say, "real people are feeling pain." I guess that means that those privileged enough to get through hard times virtually unscathed, are "unreal" people. maybe so.

I'm just worried about the real people I know. The tension is everywhere; I myself am wound as tightly as a drum these days. People close to me are being thrown out of work; families are trying to balance whether to cut health care or education costs for their kids.

Lots of people are putting off going to the doctor, dentist, or other provider. The concept of working on one's mental health is a distant fantasy.

We're all getting jumpy. Who will be next to get chopped up and spit out by our capitalist machine? The risks of suicide rise in hard times. The collection blood pressure of a society rises to dangerous levels.

Street crimes return to neighborhoods that have seemed safe for years. Cars get broken into. Muggings return. Ever more people lose their homes, their cars, their livelihoods.

That's reality for real people. And they say his thing is just getting underway...
at December 11, 2008 1 comment:

The Era of Big Cars is Over

I've been remiss lately, erratic in my posts, MIA, distracted.

Another year is ending; three weeks left. I made the mistake of looking at my retirement portfolios today. Luckily, I'd already done my grocery shopping, because that smoked salmon wouldn't have made the cut.

At Predictify, most of the user-generated questions lately have been about sports or pop culture. There's been a falloff in the volume of serious political and business questions -- "bailout fatigue," perhaps, or too many Obama press conferences?

The main political drama is whether "The Big Three" in Detroit will get any funds from Congress this year or not. Public opposition to the idea has softened a bit, from in the 60's in percentage to the 50's, but a majority of Americans continue to oppose the idea.

My cousin sent me a link to a "Boycott Alabama" movement that has cropped up in the Midwest. There is a definite feeling widespread in Michigan, Ohio and Indiana that there was a class bias in the government's bailout of financial companies and the lack of consensus to help out the domestic auto makers.

But, Republicans oppose helping Detroit, generally, and many middle-class Americans think the UAW shares some of the blame for GM's decline, in particular. The problem with this idea is that the workers, however well-organized, had little to do with determining corporate strategy.

They build the cars, but they don't get to choose what cars get built.

In this regard, GM, Ford, and Chrysler all missed the boat years ago. Why gas guzzlers? Why SUVs? Why? What rationale supports that sort of ludicrous product line?

If -- and it's a big if -- Congress passes a financial aid package for The Big Three, there will almost certainly be regulatory oversight that forces the companies to restructure and invest in new, more green technologies.

The Era Of Big Automobiles Is Over.

Shlemiel, shlamazel. Everybody in this life eventually is one or the other. Some get stuck in just the dumper (asshole) role; some in the dumpee (victim) position.

A funny thing about the current Prime Minister of Japan. His name is Aso. When you speak that in Japanese, there's a hint of an "l" at the end. So, quite naturally, I wonder if he truly is a shlemiel; probably so, since he's a politician, after all.

Today, I accompanied my special friend on a house-hunting expedition, our first. Her instincts are to buy while the prices are low, which is precisely why immigrants always do well here in America.

She doesn't have much money but she recognizes that the time to buy is now, when abandoned and repossessed houses are flooding the market, even here in San Francisco.

The places we toured were four small units in the Mission, not far from my flat. The biggest, which was tiny, is going for $388k; the next two, which are microscopic, are listed at $288k; the smallest, which is a large closet, looks like something from Goldilocks & the Three Bears. It goes for $168k.

Why so many "8"s in the list prices? You probably can guess. Because that is the luckiest number for Chinese, 300 of whom are poised to visit in a few weeks, when they will no doubt sweep up properties such as these ones.

As I see these new neighbors on the street, I can practice, "Nee how ma!"
with just the right tonalities.

Such is life during a recession here in Fantasyland. Out with burritos and in with dumplings. 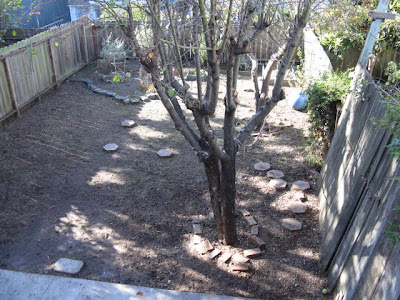 A little girl can be happy just with a balloon. She and I had a big breakfast in a diner, and she got to take home this big green globe. To her, its color reminded her of "freshness, and growing things." 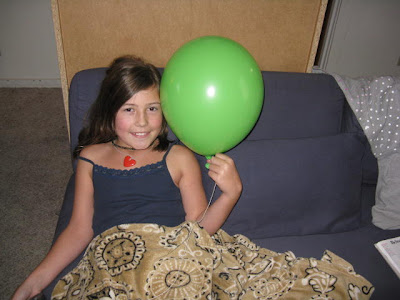 Right now, not all that much is growing out here, with the night temps falling to the 40s or below. 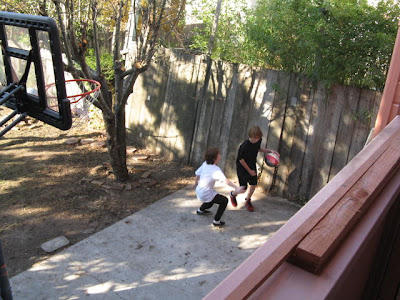 The boys hated it when their basketball landed on a rotten apple -- yuck. 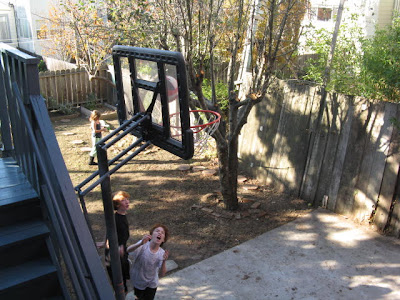 That's no longer a problem. 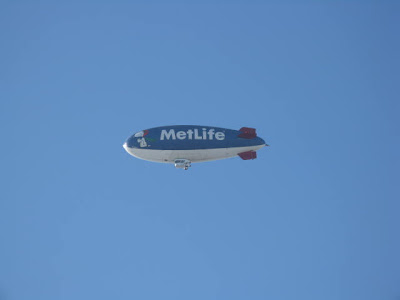 It was a blue sky Saturday, and eventually the house and yard warmed up. I was watching the birds when a dirigible drifted silently over the house, no doubt getting warmed up for its TV duty out at Candlestick Park this NFL Sunday.