Double Header Sweep, But We All Breathe the Same Air 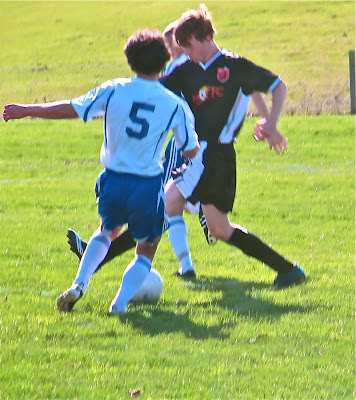 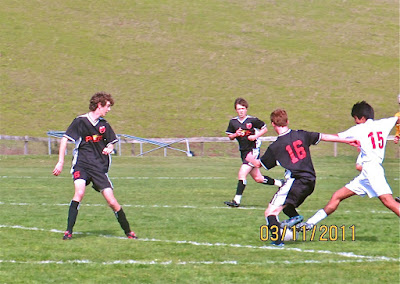 The San Francisco Seals U-16 club team, Pyros, won both games today in the Diablo Cup outside of Concord in the East Bay by identical scores, 2-1.

Back home, sunburned, windburned, and exhausted from the long drive both ways, not to mention the emotional toll of rooting for your guy and his teammates from the sidelines, where you have nothing whatsoever to do but yell, my joy at today's outcomes is muted as I watch the continuing coverage of what is happening in Japan.

Now, in addition to the horrible death toll already inflicted on the Japanese people is the global specter of a nuclear disaster.

Again and again over the past four decades, we have been assured by officials that nuclear power is safe.

But what about abnormal circumstances, which is what describes the Japanese situation? How many will now get ill and die as a result of what looks suspiciously like a nuclear meltdown underway, even though no one in the Japanese government will confirm that?

And not just Japanese people, BTW, but many others, perhaps those of us way over here, downwind as it were from the plant that may well, even as I key in these words, be releasing deadly radiation into our common atmosphere.

What cost an excessive lifestyle?

That, my friends is a terrible question, but the answer may turn out to be even worse. That answer may already be blowing in the wind.

Things to Think About During a Disaster 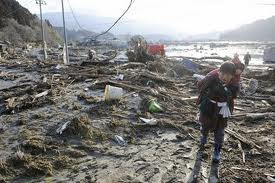 There is an inherent tendency during horrific events like those still unfolding in Japan to seize upon worst-case scenarios and initial reports as if they were gospel, but the truth is that media workers make many mistakes in the rush to update news to a hungry public.

These are lessons from an experienced (albeit unemployed) news director. Take the first reports with a mammoth grain of salt, and wait for official statements from those in authoritative positions of official knowledge to make public (i.e., accountable) statements.

This patience with what can be a laborious process of documentation is even harder for people to practice in the age of social media. Everyone finding any shred of new information is sure to post to Facebook, Twitter, etc., because in the time we now live in, everyone is a publisher. It's as easy as cut, paste and click (and in some interfaces, even easier than that.)

This morning there are reports that four entire trains disappeared in the earthquake/tsunami; that around 9,500 residents of one town are unaccounted for; and that at least 1,300 are dead.

From a news director's perspective, none of these reports are confirmed, and experience dictates that at least some of them may turn out to be false.

A nuclear reactor complex has experienced a major explosion -- that is documented. The effects of that explosion will not be known in the course of this news cycle or many news cycles to come, unless the reactor melts down.

Even in that case, most illnesses and deaths from radioactive sources are unlikely to occur in the short term but over the long term.

Furthermore, both the human and environmental damages that follow will forever slink into the highly politicized realm of debate between supporters and opponents of nuclear power.

At the root of this debate is the lack of solid scientific "proof" -- and at the heart of the statement I've just made is our collective societal ignorance about the nature of scientific inquiry.

Scientists are not in the business of "proving" causation in matters like the effects of radiation so much as testing and validating complex theories and models about what may happen, depending on multiple factors.

Sadly, given the long-term effects of the nuclear bombs dropped on Hiroshima and Nagasaki, we can say that scientific evidence does indeed exist about the probable effects of radiation at various levels, although almost all of what is known to be likely involves levels much higher than what would be expected from a nuclear plant meltdown.

I'm not minimizing the dangers a meltdown may present, not only to Japan, but to many others, including perhaps even Americans, who live downwind of that plant involved. Everything we know about the earth's environment is about our interconnectedness. The ecology of this particular situation does not require further debate, although lunatics and deniers will continue to do so for reasons others than those rooted in good science.

If there's something inherent in human nature to exaggerate the damage resulting from a disaster in the early hours and days, it may well be rooted in our own evolution as a species that has survived countless threats in the past. Not only are we secreting elevated levels of adrenaline at times like these, we feel compelled to warn one another -- that is why I would never blame all of those Facebook posters or Twitter Tweeters for what they are doing.

It's a very human act.

I'm only reserving judgment for the dwindling class of workers known as journalists. You may note I did not use the word "professionals" in connection with journalism. That's because I'm not sure it's warranted. The profession of journalism is a thing of the past. The present practitioners belong variously to vocations, hobbies, or hold underpaid positions in companies that may or may not hold journalistic values as sacred.
***

The first people you think of in a disaster reveal much more about your emotional attachments than almost any other experience you may go through. We fool ourselves all the time about who we care about in actuality.

We pretend. We feign nonchalance. Feelings are rarely convenient, even less so at a time of calamity when we indeed do very much need the comfort of those we have depended on for our vital sense of emotional balance.

Family normally comes first, but for those without family, friends become vital. Even those with family depend on friends for their emotional survival. My only point is that a disaster like this is a sort of test, a kind of opportunity to learn more about ourselves.

Whether we act on that knowledge is another question, one that reveals the state of our emotional growth from the last time we had a similar opportunity.

As it turns out, in my case, I have no friends or family in Japan that I know of(*); nor is there anyone over there who would think of me should an earthquake devastate San Francisco. So it is relatively easy for me to remain cold and objective about this particular disaster, as it has little chance of affecting me personally.

Journalists often have to report on events that do affect them, however, at least we did back when our profession used to exist. I doubt that many members of what we used to call the "public" (back before we all became publishers) ever fully appreciated this aspect of the pressure of being a professional journalist.

Putting aside your personal feelings and concerns at a time when your main responsibility is to report to the public is not easy. It is damned hard.

Although there is no one to receive my feelings about Japan, my heart does go out to the people there, simply on a basic human level. From what little I know of the Japanese people (which is less than nothing as the past year has taught me), they do seem largely decent and hard-working, much like Americans.

So every report of "four trains missing," even if it eventually turns out to be four train cars, not trains, contain the bodies of loved ones who will never be coming home again. We all can identify and empathize with the families and friends of these departed souls.

Once again, this reality -- mortality -- demands of us that look into the mirror of self-discovery to ask: "Did I say what I needed to say while (s)he was still here?" If the answer that comes back is "no," our own suffering will continue much longer than otherwise.

But that, of course, is a matter best explained by a psychiatrist, a member of yet another profession under fire here, and one virtually lacking in Japanese culture anyway.

This, like all disasters, will slowly fade from view. Its lessons, if any, for public policy will be lost in the endless debate of those who like to debate endlessly.

Its lessons for private policy, however, are a matter for each and every individual to reflect upon, before it is too late.

(*) I am, however, relieved for my friend S, who has heard that her family members are safe. 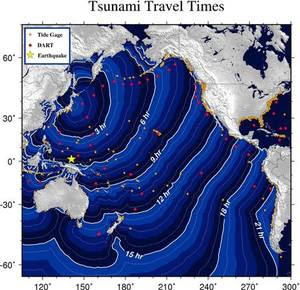 The U.S. government is able to track and predict the arrival of tsunamis emanating from Japan, where the largest earthquake in that country's history has devastated coastal areas. 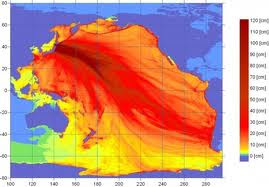 After passing Hawaii, and damaging some waterfront areas on Maui, the large waves continue to migrate and reverberate around the Pacific Basin.

The rains pounded down that night. He forced himself to walk to the appointed place, but appointed by whom?

How can it be that a man can be alone in his house, just trying to write, when he senses he is no longer alone?

So it happened. Suddenly it was as if an invisible presence had taken over his hands, his fingers, willing him to write, think and even say things he otherwise might not have said, not like this, not here, not now.

Driving through the rain, threading your way between two huge tractor-trailers, the image forms of what would happen if you just allowed yourself to slip a bit to the left or a bit to the right.

How did it happen? That’s what the voices would ask, but they would be way too late. After all, the choice to keep showing up is one nobody ever makes alone. That is what makes it so difficult to accept for all who remain.

Look up, the sky is open, the moon a sliver. Look down; your footsteps leave no trace. Here, secrets find refuge.

You walk until suddenly you are no longer alone. Where did you come from? Is this a dream?

The rain closes around you both, keeping the rest of the world at length.
She steps on tiptoes to breathe into your ear: "This never happened. I was never here."

"Tell me your story, I'm listening," she whispers again, now from an eastern wind.

You start: “She was like a feather floating in on an unseen breeze. Her eyes big as moons but dark as the night, hiding as much as they show. Her tongue soft and wet; her hands soft and warm. She folded into me like my long-lost other half; we kept each other warm when the air grew cold."

You know you've been shopping at your local Safeway store too much when the store manager comes over to introduce himself, give you his card, offer you special benefits, and asks how he might make the shopping experience better.

Baseball season approaches; I'm preparing for my fantasy league's draft later this month, and the start of the real season next month. Baseball helps anchor my year; I'm relatively unmoored in the off-season. There's nothing better than having a game on in the background; it's a lot like the warm smell of baking cookies.

Dinner with a friend. News from a friend who has recovered from a major heart attack. We're within nine days of the due date for the birth of my first grand-daughter.

All thing considered, life is good.