On the plane to New York last week, all the way across the country, I read a new novel, Dying Words, by K. Patrick Conner.

The book traces the final days in the career of a San Francisco Chronicle reporter, Graydon Hubbell, who, after a heart attack some years back, has been writing only obituaries and sits in a corner of the newsroom called Section Eight, which is populated by the final few elderly journalists not yet remaindered during the endless series of layoffs and buyouts that have virtually destroyed the newspaper over the past decade.

Early in the story, Hubbell learns he is dying of cancer and has very little time left. He continues to work and encounters a series of disasters that journalists know all too well can happen, even to the best of us. One name accidentally substituted for another in an article, embarrassing his boss who was a friend of the departed; a complaint from the paper's diversity committee that most of those whose deaths he covered were white men; and finally the worst calamity that can visit any obit writer...a premature obituary.

If this sounds like a depressing novel it isn't. I was riveted as I read page after page. I didn't want it to end. Ken Conner writes with a droll humor and insight of one who knows that his character is the perfect metaphor for a dying industry, with all of his (and its) frailties and principles, habits and courage.

The novel's strong sense of place captures San Francisco perfectly. Those of us who have lived here for decades know that it is a maddeningly special place, with many of its historic corruptions now replaced by a relentless technological determinism that is sweeping many of the Graydon Hubbells among us aside.

They feel, as my father once described himself to me, like "dinosaurs."

What is unusual about this book is Conner's ability to slow life down, even in its final weeks and months to all it ever is anyway -- a series of moments. After all, until you are dead you are still alive. Even in diminished circumstances, with mind and body no longer in anything resembling good working order, most humans choose to persist.

In the case of the fictional Hubbell, a wonderful mind continues to appreciate life's fine ironies, even those that bring him his greatest pain. Somewhere along the way, he still discovers love, pleasure, and how to give whatever he has left to others who might benefit by the exchange.

This is a book about kindness, and the generosity of spirit, an appreciation of tradition even after traditions no longer seem relevant. In that way, it is spiritually satisfying, and a reminder that no matter how bad things may seem to be in your life, you still have the power to set an example and make someone else's life better in the process.

How the Games are Played (Inside)

Back to School Night for my high school senior, the last one of his four years at Balboa High School. All the principal, assistant principal and other parents wanted to talk about was my son's horrific head-to-head collision on the soccer pitch a week ago tonight.

"You could hear it from the stands," the principal told me, "the sound of their heads crashing together."

As it turns out, the other boy was knocked out by the force of their collision, and required 15 stitches; Aidan required eight. As far as we know no one suffered a concussion or other brain trauma, but it had to have been at the least a very jarring hit for both of them.

Aidan got his stitches out yesterday and is cleared to resume playing soccer next week.

"We need him," the principal told me.

The team is 1-3-1 with 7 games to go. I guaranteed the principal the team will still make the playoffs this year, even though the odds seem extremely remote.

That's because I expect Aidan, as a captain of this team and a senior, to emerge as a leader. It's his time. I know what he's made of. I believe in him.

I know that the odds are long. They have to win at least 6 of the last 7.

Sitting in the chairs he sits in, day after day, listening to the teachers he listens to, I experienced a sort of replica of my son 's school days tonight. It is an odd feeling -- being as if you are your child.

And, to a certain extent, the teachers treat you as if you are your child.

I can see that his ambitious plan to take two AP courses this fall has created a serious strain on him. These are college level courses, in Statistics and English Composition that require a level of critical thinking he has not encountered up until now, but that he will of course need to develop by the time he is in college.

It's at times like these that you feel the vulnerability of your child.

No one prepared him for this!

Of course, no one prepared any of us for the realities of life.

His academic preparations are what they are, the result of these times, this place, the budget cuts, his presence in a nearly bankrupt school system, our family's lack of resources.

Then again, he is a star athlete, and by that, I mean a natural competitor. Maybe in the end soccer will be his ally not only on the field, under the sun, but in the classroom, where he needs to learn to work just as hard to be great. 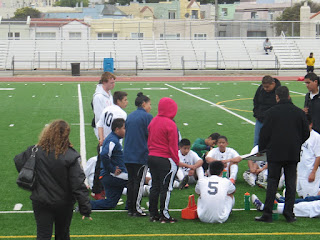 With his eight stitches and a jagged scar above his left eye, my son had to watch tonight's game from the sidelines with the rest of us non-players, except when he stood with his team before, after and at halftime in the contest. It ended in a 1-1 tie in the bitter cold; the peculiar kind of cold only San Franciscans know.

If sports like soccer serve as a metaphor and an educational opportunity, they also can be intense personal experiences for everyone involved. As Aidan prepares for applying to colleges this fall, he is drafting his personal essays.

I read his first draft of the main essay for the U-C system the other day, and I felt proud of him. He writes in a clear, distinctive voice -- very much his own voice. One measure I always use as an editor when evaluating writers is how much they sound like themselves.

That may seem to be an odd comment to make, for those who don't write and edit professionally, but there are many, many writers who don't sound like themselves at all, and I don't necessarily here mean a merging of their spoken and written word choices.

Plenty of folks write badly, in stilted, over-the-top language, or mangling English so badly one has little idea what they may be trying to say.

So a young man of eighteen who can write about himself and his life with clarity and purpose is a relatively rare creature, in my experience.

If his grades improve, and his test scores, he may get into some colleges on the strength of his writing voice.

That would be gratifying.

I could never have been the athlete he is; but he could easily become the writer I've tried to be. 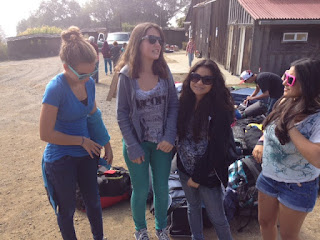 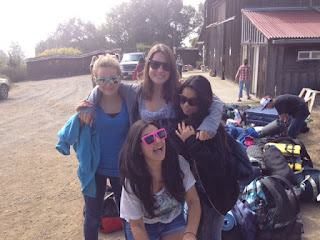 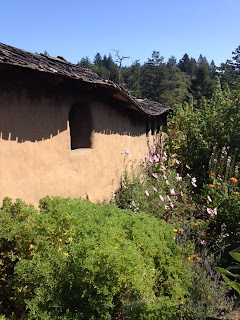 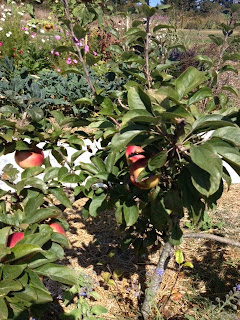 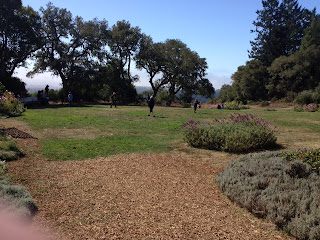 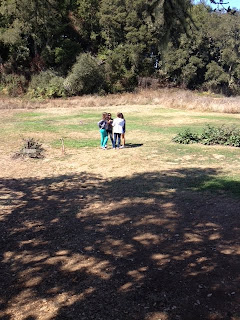 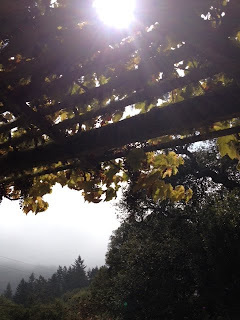 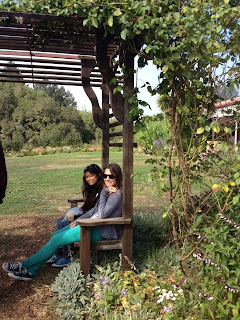 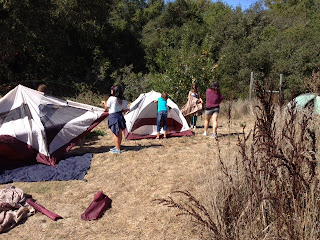 I drove my youngest and three of her friends up the coast 75 miles northwest of here for the start of their one week of "farm school."

I'm still waiting to recover some energy after my recent trips, so for now, pictures will have to suffice. Words will follow, once I can muster them. 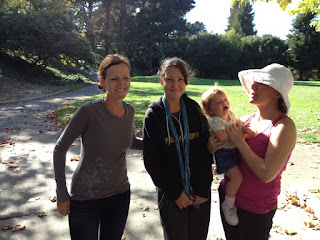 I'm too jet-lagged to write but here are my three daughters and my one grand-daughter earlier today.
at September 23, 2012 No comments: