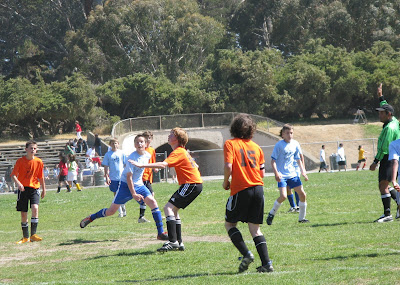 Today was a surprise. The long run of CRZ Fusion supposedly ended a week ago, but unlike all good things that must come to an end, this one decided not to. 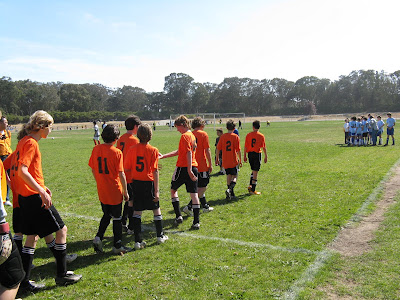 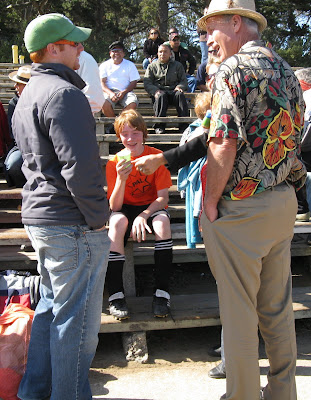 Thus, they ended their final season together tied for third place in a league where the top two teams were so superior, even the referees said they belong at a higher level.

No problem for these kids. Althoug they would have loved to go out with a win, obviously, ending the season and their many years together with a tie was okay too.
at June 07, 2008 No comments: 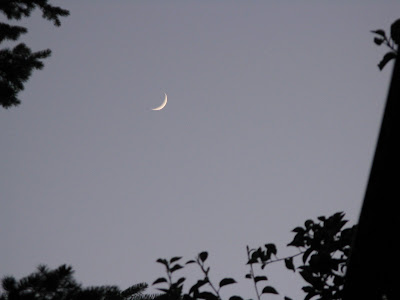 Under a blue sky, our fruits are growing. 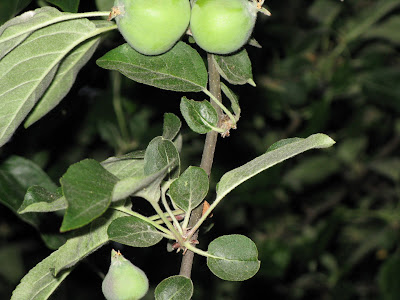 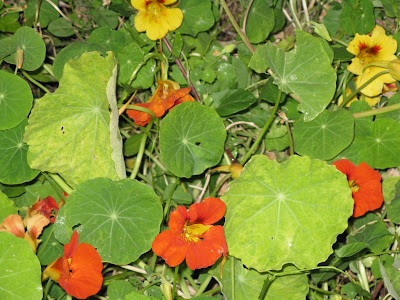 Now is a time when they can what they want to do. 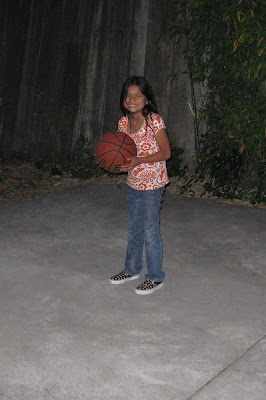 A magical time, by my memory. 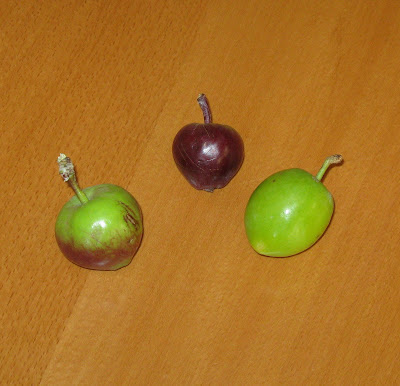 Many decades after my own first day of summer vacation, in a far different era, when the end of a school year meant the start of my work schedule, I empathize with my children's joy. 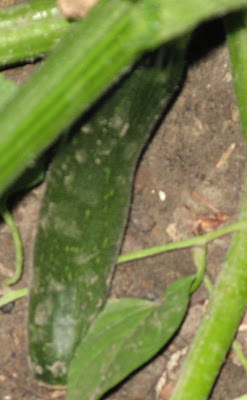 It's time for them to dream and experiment, read, play, feel free. These are the best years of all, but of course we would never tell them this. 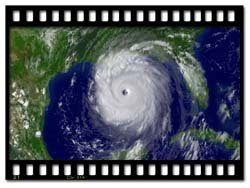 Since the beginning of time, people have been trying to predict what the weather will be --today, tomorrow, and on into the future. Voluminous data has been collected and analyzed. Satellites and other technologies have been thrown at the problem. Fancy graphic screens behind the weather guy/gal on your local TV station appear to add an empirical layer to the evening forecast.

But, most of time, most of there experts still seem to be wrong.

Into that void, steps the Weather Prediction Center, a new platform that allows you to make your best guess about various weather-related questions. Or, think up a new one yourself. If you've read The Wisdom of Crowds by James Surowiecki, you can experience the theories in that excellent book here.

The basic concept is that large groups of people, predicting randomly, may guess the outcome of some future event more accurately than any one "expert." Of course, the outcome also depends on how well-informed the "crowd" is on the question at hand, as well as what kind of time horizon is involved, among other factors.

But, from my perspective, all of that is icing on the cake. The fun part is just to join the party and predict!

(And then, check back now and then to see how the results evolve over time.) 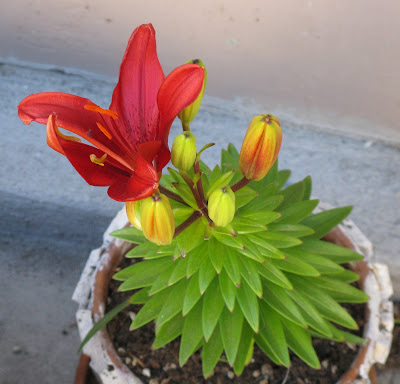 Look what greeted me tonight, upon my return home.

One lovely red flower had opened in today's sun, right next to my front door.

As I trudged from my car, for once parked not too far away, with two computers stuffed into a bag over my drooping right shoulder, wondering what might be in my mailbox (nothing useful), I spotted her.

I planted lots of plants this spring. Virtually all have proved to be failures. But, in this particular pot, I simply watered a few bulbs I'd noticed nestled in the soil. I don't know how they got there, but the main one has evolved into this display.

As I look at these lovely petals, so delicately parted, I can only think of hope. Well, to be honest, I also think about entering, penetrating, and climaxing, but that would be my testosterone talking. 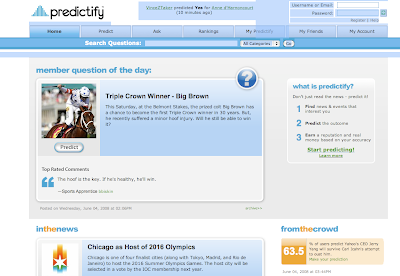 REDWOOD CITY, CA – June 9, 2009 – Predictify, the community-based prediction website that allows users to test the theory behind the popular book "The Wisdom of Crowds," has launched a new home page that connects predictions with breaking news stories and events.

"We want to layer a unique editorial voice on top of our vibrant prediction community so that our users can read a news story, make a prediction on the topic, and have a discussion all in one visit," said Predictify CEO Parker Barrile. "Our new homepage makes reading the news an interactive and forward-looking experience.”

To lead the editorial effort, Predictify has hired veteran editor and blogger David Weir. "I'm thrilled to join this team," said Weir, who formerly helped build Salon.com, Wired Digital, and other web companies and currently writes a column about the media industry for BNET. "Anybody curious about the future, numerical projections, crowd-sourcing, and community media will love this new service.”

Predictify's latest strategic moves come just as twenty-one leading researchers in the field reported in Science Magazine, "There is mounting evidence that [prediction] markets can help to produce forecasts of event outcomes with a lower prediction error than conventional forecasting methods."

The experts stated that the accuracy of everything from election projections, to sales of new products like computer printers, to storm forecasts by the National Weather Service, can be improved through prediction market technology that harnessing groups of informed people motivated to express their opinions.

Predictify's new editorial strategy will also highlight the data generated by the tens of thousands of predictions made on the site every day. "We have a lot of interesting data on a wide variety of topics that we'll present in digestible bites," Barrile stated. On each question, the collective prediction can be filtered by demographic attributes and past predictive accuracy to identify meaningful differences between user groups – for example men vs. women, Democrats vs. Republicans, or new users vs. those who have been especially accurate in the past.

Predictify is a community-based prediction platform that makes predicting real-world events easy and fun. Users can research, discuss and predict the future, build a reputation based on their accuracy, and even get paid real money when they’re right. Marketers can create awareness, engage consumers, and gather data by posting promotional questions about a product or service. Since its launch in October 2007, Predictify has partnered with the New York Times, the San Francisco Chronicle, and Freakonomics.

Note: "The Wisdom of Crowds: Why the Many Are Smarter than the Few and How Collective Wisdom Shapes Business, Economies, Societies, and Nations" was authored by James Surowiecki. 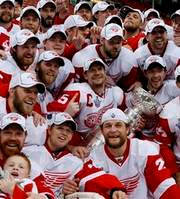 The oldest trophy in North American sports is not in baseball, football or basketball -- it's the Stanley Cup in hockey, which dates back to a leader called Lord Stanley in 19th century Canada. For the past 80 years, it has been awarded to the top team in the National Hockey League (NHL) , which in my childhood, consisted of six teams: the Montreal Canadiens, the Toronto Blue Jays, the Detroit Red Wings, the Boston Bruins, the New York Rangers, and the Chicago Blackhawks.

Now there are teams coast to coast in both Canada and the U.S., and it has become incresaingly rare for one of the old franchises to snag the Cup -- with the exception of my father's family favorite Red Wings. Tonight they won their fourth Stanley Cup in the past 11 years, and their 11th in 80 seasons. (They've made it to the finals 12 other times, or 23 (almost 30%) of all the seasons the NHL has held playoffs to determine who wins the Cup.

That makes this Detroit team one of the most successful in all of professional sports.

My father would have loved this night. We, his descendants, sure did. As I ponder that thought, I realize that his parents were born in Ontario right around the time Lord Stanley established the Cup...some 40 years after the first Weir (James) immigrated there from Ireland, in the midst of the Grreat Potato Famine.

The Future Has Arrived 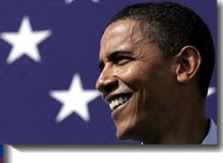 I believe that a good man clinched the Democratic nomination for President tonight. Long-time readers of this blog know that we predicted this a long time ago, before the polls had swung in his favor.

Who knows what will happen next. The contrast between the parties' presumptive nominees could not be greater. A warrior vs. a man against the war. An old man against a young man. A white man against a black man.

In my view, this is the right historical moment for this confrontation to occur. Every American who votes in November can look into his/her own heart and decide where they stand.

One can be forgiven if his/her choice is for the older man, a legitimate military hero, a true maverick, and one who reaches across party divides to appeal to Independents.

I myself have voted for McCain in the past. I like the man, and I respect him enormously.

Others will sense the true meaning of this opportunity. The America McCain represents is in the rear-view mirror now. We do not need warriors any longer. We need, IMHO, a person who can reignite the inherent respect for the American Dream, absent our guns and our big-footing.

I trust that enough of my fellow citizens will vote as I will, for a new leader, in a new era, and therefore ever so pragmatically affirm the true meaning of patriotism.

Face of a Generation 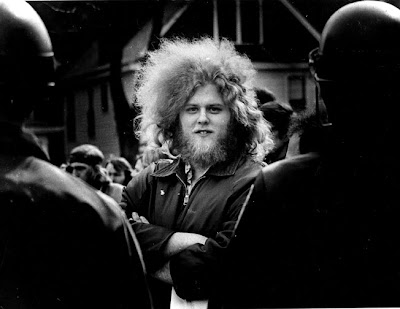 As our little memorial for the late Ken Kelley approaches, less than three weeks from now, I'm hearing from people all over. Tonight, in my inbox, this lovely photo arrived courtesy of Leni Sinclair. She doesn't know who took it, but it captures one side of Ken -- his fearlessness in the face of power (as represented by armed cops) -- that is emblematic of a generation.

Much maligned by those who chose other paths, 60s activists did something very few generations of Americans have ever done. They stood up to the entrenched power and said, "no."

No to the Vietnam War.

No to discrimination against homosexuals.

No to excessive corporate power.

We were a generation who knew what we were against. Many of our peers, of course, did not appreciate our actions. But, 40 years later, it would be hard for anyone to argue that we were on the wrong side of history or of morality.

Over the past 20 years, the conservative vision for America has been polluted by demagogues who wasted everyone's time and energy on non-issues -- gay marriage, abortion, life support, religious belief, flag pins, patriotism -- all sorts of things I would characterize as personal choices, not legitimate political issues.

What we need in America is not more of this noise, but leaders with true vision about the things that truly matter. Those of us who formed the protest movement of the 60s were a small slice of a generation, in reality.

But, in retrospect, we were right. This time around, those of us still alive and sentient should be heeded. It is time for America to downsize, retreat from military adventurism, embrace diversity, reduce wealth disparity, accept globalism, lead the critical fight against climate change, and speak truth to power.

That would be a fitting legacy for my friend Ken Kelley. He was a man who never had any trouble whatsoever speaking truth to power. 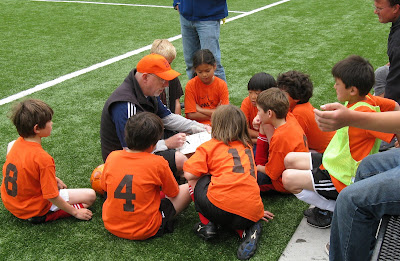 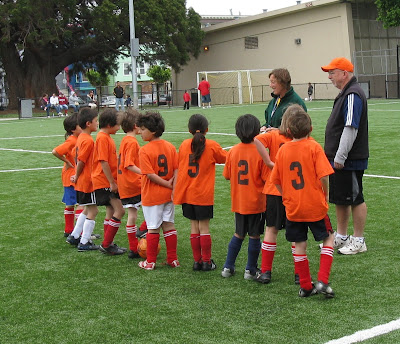 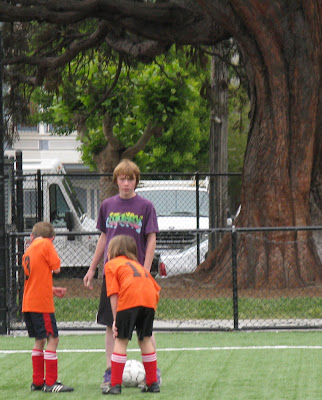 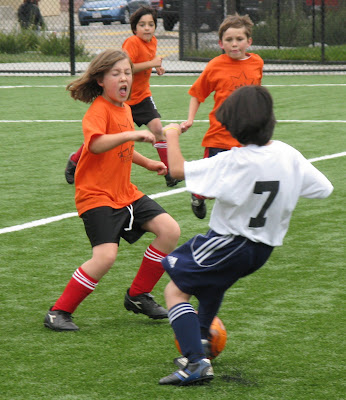 They played, tough as always. After losing, SF United said their good-byes. Next fall, the boys will have one team and the girls another. So, one of childhood's rituals -- coed sports -- came to an end. 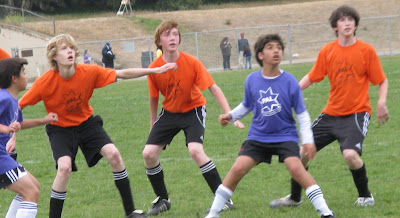 Later in the day, their big brothers played, with terrific intensity. 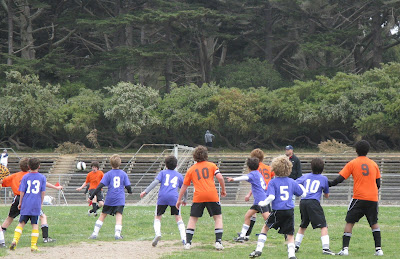 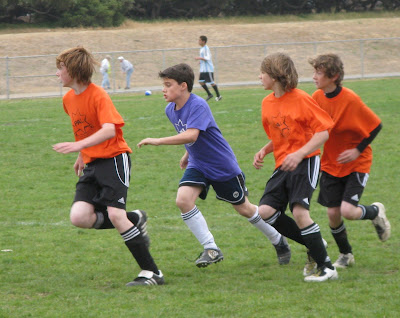 Under a cloudy sky, with a cold breeze coming in from the Pacific, they ran and jumped and fought. 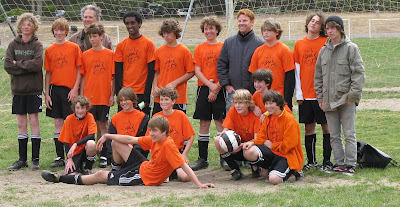 In the end, they lost a close game, 2-1. With that, the members of CRZ Fusion said good-bye. Most of them are headed to high school in the fall; the rest will have to join try to attach to new teams for the remaining year before they go to high school.

Kids grow through so many transitions so rapidly, they become better at managing them than their parents. They were all smiling and partying afterwards. We wore more wistful looks.