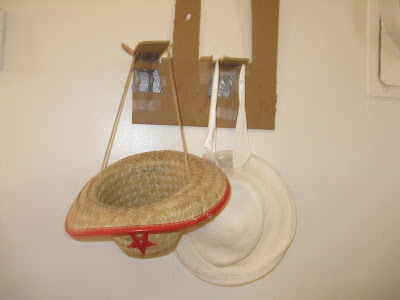 The girls played soccer in the rain, losing 0-8, but they played well, by all accounts. It was a question of playing a team in another class whatsoever.

I had to miss it, as I worked as a judge in an annual journalism awards competition out at SFSU.

Back home, my daughter invented a "hat hanger." It's up on the wall. 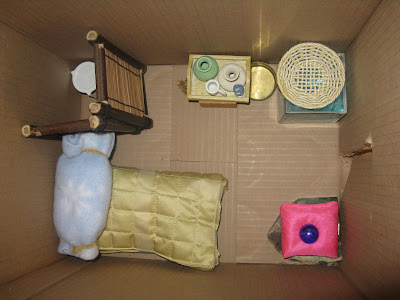 The girls also built a "house."

The rains, meanwhile, have departed, but we still have a white/gray sky over this peninsula.

It doesn't snow here and we don't get thunder storms.

If it snows, it will be on the night a special girlfriend tells you she is leaving you, even though she loves you.

I don't know what happens when a large lightning storm settles over the City; it's that rare. This tiny peninsula that stretches out into the mightiest ocean in earth, has a Mediterranean climate.

But for many hours now a massive storm system has been sitting high overhead, delivering a regular series of horizontal flashes and deep rumblings that make things fall over inside my flat.

A bit of rain has even fallen! It never rains this early in the wet season. Never!

This seems Biblical in proportions. Maybe the Giants really will make the most amazing comeback of all time and make the playoffs. Or maybe I'll actually get a real job -- or win the lottery. Maybe we'll get peace on earth or national health care reform. Maybe climate change will be reversed. Hell, this probably is climate change. Maybe the Bay Area is becoming the tropics.

Yikes, there is another flash. What an odd way to begin a weekend. I wonder if my daughter's soccer game wil be cancelled?

Flower in a Night Sky 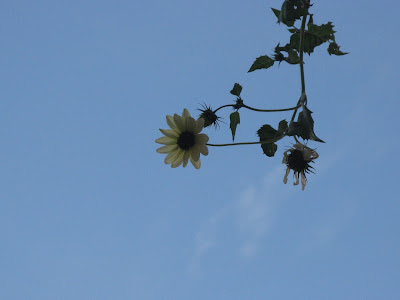 Before the sun set here in the west tonight, I noticed that a single flower was growing high above, reaching far from its earthly base to blend in against the blue of our California sky. 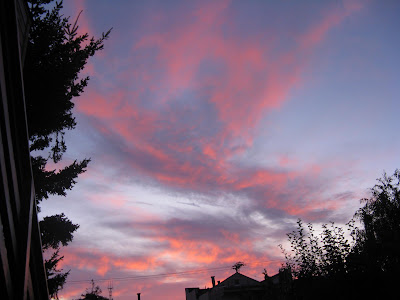 As I watched it, the sun fell over the Pacific and our sky started to change color. 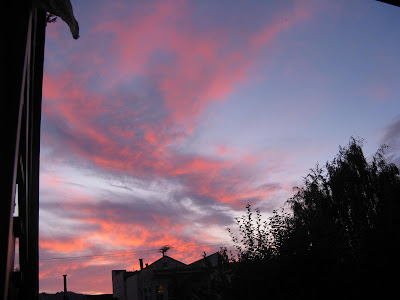 The rest of this post is devoted to what I saw. 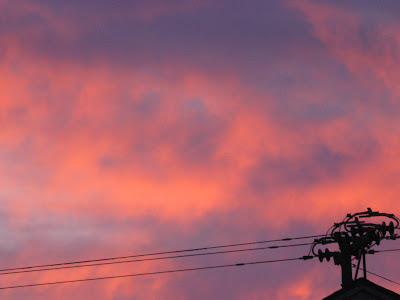 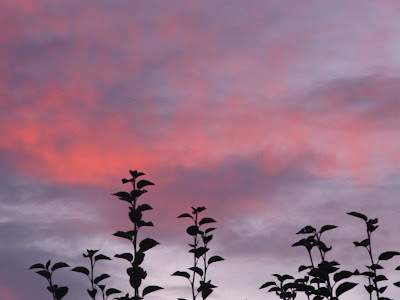 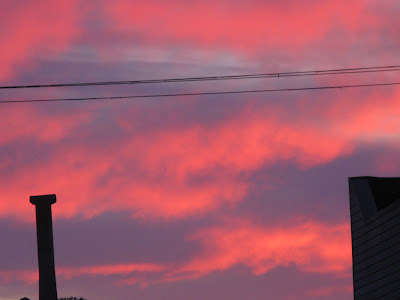 Let's be honest: The most disturbing thing about America in 2009 and the main threat to this country's security is not al-Qaeda or any other external group but the mentally ill, right-wing fascists in our midst.

I do not care to spend much of my time listening to the likes of Rush Limbaugh, whose gas stinks and whose words stink more, but he and his ilk are clearly trying to rouse the desperate, shrinking minority of right-wing, white Christians into a murderous frenzy in order to assassinate the President of the United States.

The FBI is investigating these hate-mongers, as is appropriate, and monitoring all of their meetings, according to my sources. On the other hand, since they are all old, lazy, fat, white men, both the feds and I are quite sure they do not have the guts to actually take up guns anyway, nor could they shoot straight if they did so.

The best they can do is shout lies at a President when he is speaking. And then apologize, weakly, afterward.

Wimps! All wimps. How sad. How pathetic. They are losers, failures, and, IMHO, utterly un-American.

That's right. We true Americans don't like you. Maybe it's time you moved to New Zealand.

Part of the Team 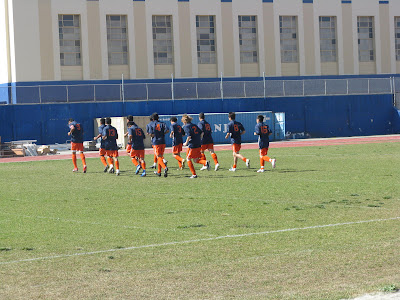 Best part of working for myself is I can spend more time with my kids. My 15-year-old is adapting well to high school, and after today's game, his soccer team is 2-0.

(If you click on the above photo, you'll easily pick his shaggy red hair out from the crowd, as everyone else has cropped black hair. Yep, he wears #2.) 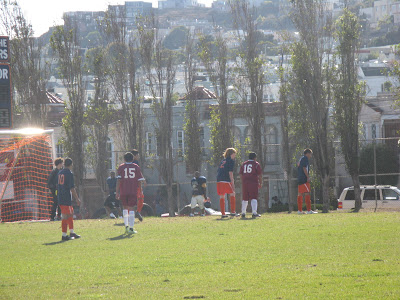 They haven't been scored on yet, and that reflects well on the defense. He played all 90 minutes today as right defender; it looks like the coach has decided he is the man for that job, for now. 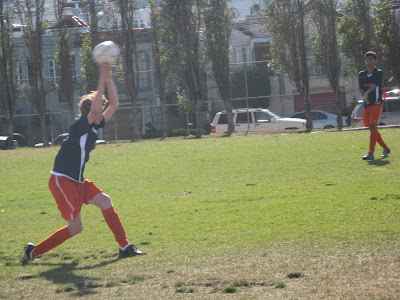 It was a lovely day and it's a very hot night in San Francisco. I made my athlete a steak to celebrate his recent birthday, his work in school and on the pitch, and my overall admiration and love for him.

Just the two of us. He told me how much he likes being in an environment with lots of people different from him. He is one of very few white kids in his class, and he said that suits him. He's working hard in class and doing well so far.

A nice evening, for a father and a son, and a simple reminder that it really doesn't get any better than this. I'm blessed.

We're at an intriguing point in the national debate over health care reform. Unless you are a very serious policy wonk, you probably have been having a bit of trouble sorting out all of the charges and counter-charges swirling around the Obama Administration's effort to implement the first comprehensive reform of how Americans are insured against health risks in decades.

Many ships have crashed on these shores, most memorably, the first Clinton Administration, where President Clinton sent his wife into an early political battle. She failed, and his years in the White House never again provided any political opening to revisit this issue.

Let us be clear why serious health-care reform is so difficult: Money.

In case you thought that by living in the richest country in the world, and a purported democracy at that, entitled you to a reasonable opportunity to insure yourself and your family against the awful but substantial risks that somewhere along the way, you or one of those you care about most will develop an expensive health "condition," you were dead wrong.

You see, in America, big insurance companies make billions of dollars making sure that when we most need insurance, we will not be allowed to have it. That is the bottom line, and that is what Obama is trying to fix.

My analysis of his strategy is that he has been holding the so-called "public option" over the heads of the industry to scare them into becoming responsive to needed changes. They have had a good run, but their days of massive profits at the expense of the rest of us are done, and they indeed are truly scared shitless by the specter of Big Government cracking down on them.

It's a classic Bait and Switch. Obama knows these wimps are so soft and fat in their profitable enclaves that they will breathe a massive, fatuous sigh of relief once their profits are only cut in half.

Meanwhile, you and I, fellow citizens, will finally get the relief we deserve.

I predict Obama will abandon this bluff, the public option, once the features of the main health care reform bill attract enough bipartisan support to not only pass Congress but convince independents and responsible conservatives that this is change they can live with.

He is a master politician, after all.

I doubt he ever was married to the public option, any way. After all, he is not a leftist, he is a centrist, and most of all a pragmatist. He has manipulated the freaked-out right-wing fringe into a corner from which they cannot escape.

As a long-time political analyst, I appreciate the moves of a master politician at work here. It amuses me to listen to the chattering classes on TV. They are only now beginning to catch up to Obama's moves, and they remain a lap or two behind, especially at CNN, Fox and MSNBC.

Reform is imminent, and even his opponent in the last election, John McCain, senses that now. This is a man who knows how the game is played.

We'll have an acceptable reform in place by the end of this year, and that is a blessing, especially for the sick, the elderly, the poor and the uninsured. 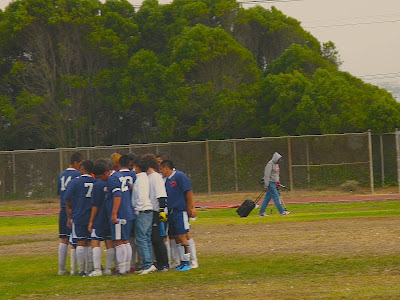 Walking out onto a foggy, windy high school's soccer field yesterday afternoon, it wasn't hard spotting my own redwood sapling. He's grown taller over the summer, has just turned 15, and yesterday was his debut as a freshman on his school's varsity team.

As the only kid in the lineup not of Latino or Asian lineage, his bright red hair stood out from the rest. 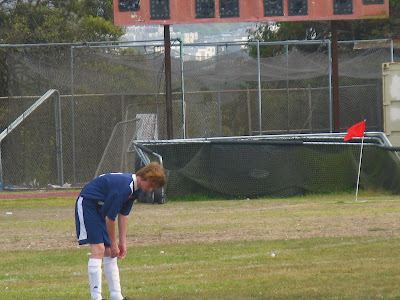 His coach started him at defense, moving him around to mid-field and back to sweeper, and he played almost the whole game. For most of the second half, he was assigned to cover the opponent's best player -- a very strong, fast kid from Africa whose moves were a thing of beauty on the pitch.

However, against our redhead, he never got a shot off. They had two violent collisions, not intentional, and the younger fellow went flying. As a Dad, you always flinch when you see your kid go down that hard, but both times he bounced right back up and into the action.

Both times, he also beat the other kid to the ball and reversed its direction away from his goal before he hit the deck. 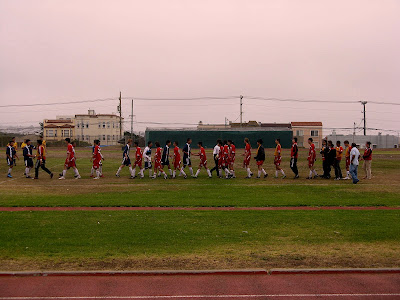 When it was over he and his teammates celebrated a 3-0 victory and then shook hands with the other team. Game One went to the good guys, and a certain redhead demonstrated to everyone present that even as a freshman, he belongs on the varsity squad.

Think I'm proud! This is a very restrained version of how I actually feel. This is straight reportage, while I'd rather write a press release!
at September 09, 2009 No comments: 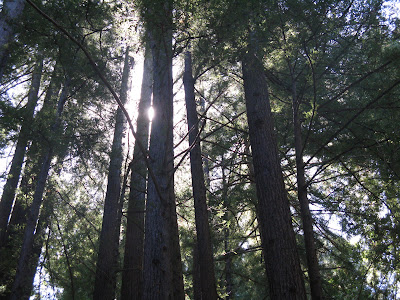 Another good way to get some perspective on the irritations and stresses of daily life is to visit a redwood grove. With time sped up (schools starts, vacations end, people go back to their offices, everyone finally gets back to business) it's my habit to slow time down. 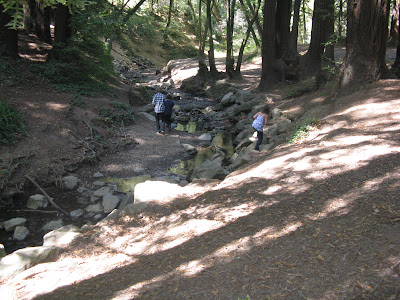 There's almost no place on slower time than a redwood forest. These trees live much longer than we do. You could come and go every day for years and never see anything change. 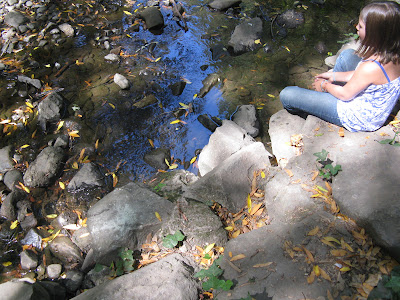 Of course the trees grow, but they are already so enormous, we cannot see to their tops. Staring upwards reminds me of how my grandsons look up at me; their heads craned way back, so much so you're afraid they may flop over backwards. 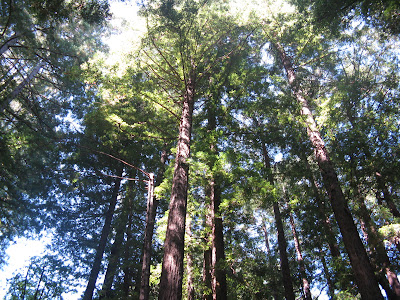 Were like redwood trees to the tiny tots, of course. 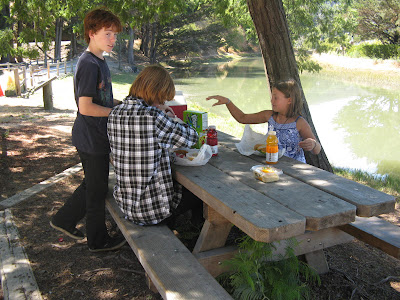 Meanwhile my two redwood-tree-like boys and my daughter closed out Labor Day Weekend in the woods and fields. The buys secured a hilltop from any potential invaders by using new clear plastic BB pistols, without any BB's. Their sister served as a scout. 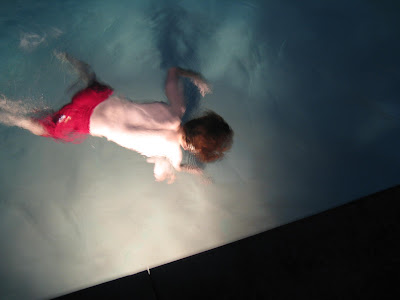 We also play this game whenever we visit a hotel with a pool. I throw in a quarter; they dive to retrieve it.

Transition times demand rituals, I think. We like to go away to the same hotel, visit a set of favorite restaurants, and spend most of our days out in the sun. Everybody slows down, just for an instant, before we drive back into our urban reality.