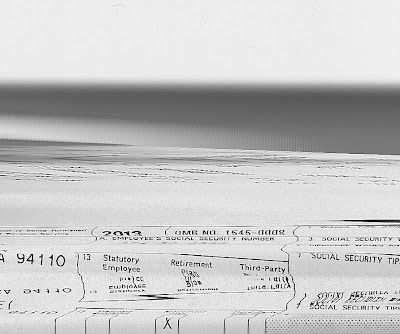 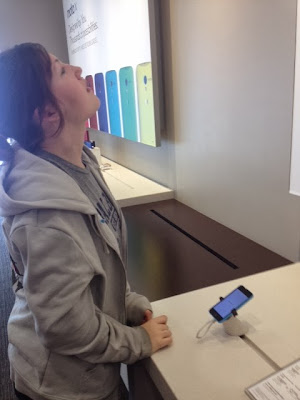 The top image is simply a botched scan on a tax document. It seems like every weekend I am either filling out taxes, financial aid forms, or similar documents. And this photo tells it all.

The other photo is from the Verizon store in the Mission where the kids and I always go to upgrade their phones. Verizon has changed its policy and no longer requires people with accounts like ours to sign up for two-year contracts every time we get a new phone.

Julia was thrilled to get a new iPhone 5C (green) for about $50, to be paid over the coming year. Of course the monthly contract -- for calls, texts, data, etc. -- is how Verizon makes its money and I know that. But until recently they also charged a lot when you needed to upgrade to a new phone. Plus there was always that irritating two-year commitment.

Julia was very happy, not only about her new phone, but about a job opportunity she now has -- working in a dog-grooming shop in Noe Valley. When I picked her up after her two-hour trial visit today, she was smiling and talkative.

As we arrived home, a new cat greeted her on the street. Black and white and a bit pudgy, the cat sought her out as animals always do. She sat on the sidewalk and played with the cat and then it followed us inside for a while.

All in all a very nice day, topped off when my college team, Michigan, won its final game of the basketball regular season to finish with a record of 15-3 in the Big Ten and an outright championship.

Math, Magic and Mysteries of the Universe

As I walked home, commuting from the office tonight, I saw what looked like a dark rain cloud rising in the West. One of the joys of living on the edge of a continent is the kinds of dramatic weather events that sweep in from the mighty Pacific.

It's a reminder of how small and powerless we are, little mammals beholding the much greater power in the sky.

An hour later, that cloud seems to have shrunk back into something that looks more like one of more familiar fog banks. According to my handy iPhone weather app, there is only a 7 percent chance of rain tonight, so I'm going with that.

Seven percent is essentially a one in 14 probability. Those are not very good odds for most bets. However, if you had a one in 14 chance to win a car in a drawing, those would be excellent odds.

I've been reading Nate Silver's The Signal and the Noise: Why So Many Predictions Fail — but Some Don't, which I commend to anyone wanting to think more deeply about probabilities, causation and correlation.

As a former math major who could not handle the Fundamental Theorem of Calculus, and therefore switched to story-telling, I have nevertheless always remained in love with math in the abstract.

Maybe it is the kind of unrequited love for something or someone who will never notice you, or value you. I'm kinda in love with math but math is most definitely not in love with me -- nor with my brain.

But when numbers cycle in and out, always, everywhere, all the time, I feel beset by the mathematical beauty of the universe. There are, as Silver eloquently demonstrates, mathematical models that quite accurately predict the path of storms nowadays.

So a 7 percent chance of rain is just that -- something unlikely to happen more than once every fourteen times these particular meteorological conditions develop in this micro-climate.

Then again, maybe this will be that night?

That is something even math does not know. Because there is also always magic afoot.
at March 06, 2014 No comments: 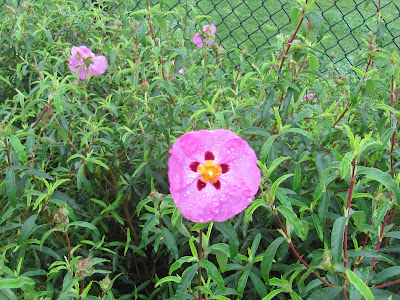 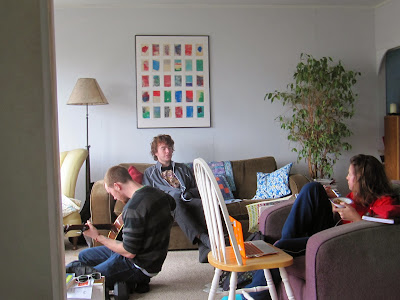 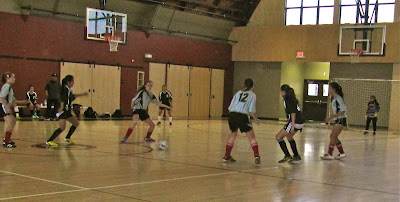 The kids and I, like most people, always enjoy watching these award ceremonies. Especially when it's a rainy day!

I taught Aidan how to file his own tax return today and completed Dylan's financial aid form. Julia's been busy with homework after her futsol game. We stopped by Whiz Burger near here on the way across town for an Oscar day late lunch.

Aidan's at work and will have to miss the show. When the awards are completed I'll take Julia back to bernal.