I hope it is fine

As this particular night turns into tomorrow's morning, my youngest child will officially turn fourteen years of age, a bit before the sun comes back up. That is a difficult fact for me to accept, since in my eyes she is still a little girl.

I also remember being 14 myself, as clearly as if it were yesterday. But my world then was so different from hers today that it would be difficult to find any parallels between my life and hers, so I feel as if I have no wisdom to share with her about this threshold. 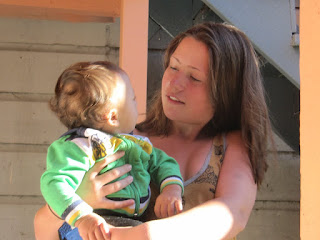 We had a family party tonight at her favorite Chinese restaurant. Tomorrow, after her soccer game, she will have a sleepover party at her Mom's house with friends. 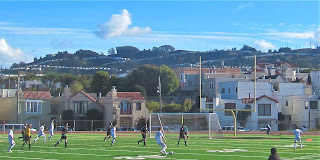 (Click on image to enlarge -- Aidan approaching the net with ball yesterday.)

This city is absolutely electric, as the San Francisco Giants host the opening game of the World Series against the Detroit Tigers tonight. Thus my favorite team as an adult faces my favorite team from my childhood.

As if that were not enough excitement, tomorrow my son's high school soccer team enters the city playoffs for the third time in four years. I never thought this could happen, because their season got off to a horrible start.

They lost their first three games, and under a new format, that meant they were in last place with a quarter of their season over!

Plus their head coach resigned and didn't even tell the kids goodbye.

The math sucked. In previous years, there were 16 regular season games. This year, there were just 12.

To make matters worse, they did not appear to have enough talent to compete against the best teams in the city. In those three games they were outscored 3-12.

I was in New York when it happened. Aidan was in a horrific head-to-head collision with a player from the other team in the one game I had to miss this season.

Both boys lay on the field, bleeding from gashes in their foreheads. Fortunately, the injuries turned out to not be serious, simply requiring stitches, but somehow on that night, Balboa's season started turning around.

They won that game and then tied the next one, a game they should have won, while Aidan had to sit on the sideline to let his stitches heal and not take any headers that might reopen the wound or cause related concerns about head injuries.

So at this point they were 1-3-1 with 7 games left, still way down in the standings and with little hope of making the playoffs.

After that game they became virtually unbeatable and who can say why? They were 6-1. Over the last nine games cumulatively, they outscored their opponents, 35-10. That amounts to an average game score of 4-1, which in soccer is a blowout.

By late last week, we knew they would make the playoffs, but yesterday they sealed the deal.

Late in the game, the head coach asked Aidan if he felt good enough to go back in for the final minutes. (He'd come out to nurse and ice a knee injury he suffered when an opponent kicked him in the right knee, his kicking leg.)

He said he did and so in he went.

Suddenly, the game plan became clear. Either the coach had indicated to the players on his team, or they knew on their own, but they were all determined to try and set up their senior, and co-captain, to score a goal.

Aidan's had some chances but hadn't scored all season. He plays defense so such chances come rarely.

Now he was playing center forward, which (like it sounds) is the leading offensive position on a soccer team.

Every time Balboa got possession of the ball, the players on the bench started chanting "Aidan! Aidan!"

The crowd of students in the stands picked up on the chant and started calling his name as well.

The crowds at high school soccer games are small, but with 20 or 30 people chanting his name, I'm sure he could hear it out on the pitch.

As a pass reached him in front of the net he scored, and we cheered, but then the referee whistled that a teammate had been offside and indicated the goal didn't count.

At this point I put away my camera. My hands were shaking too much anyway to get any kind of decent photo, I was so excited to see him playing offense, after 12 years on defense.

A few moments later, he took a pass, executed some pretty nifty moves, eluded the defenders, reached the net, and punched in his goal.

I don't think I have ever heard a bigger cheer at a Balboa game, though maybe it was just the thumping of my heart in my chest.

He smiled a big smile as he returned upfield, high-fiving his teammates, who had made this opportunity happen for him. He'd accomplished their goal for him -- to score a goal in his final regular season game.

Tomorrow, the playoffs begin, at 3:30 at Crocker Amazon. From here on it is an elimination game every time. You lose, it's over. You win, you go on.

Now, on to the World Series. 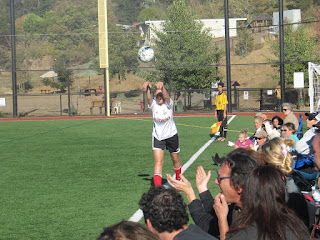 Far north of here I watched my daughter play soccer in the bright sun; then she and I drove south, listening to the Giants' game on the radio.

And, on the rare occasion (think 2010) that it doesn't really end, because your team wins the World Series, that book becomes eternal -- one you will gladly read over and over, forever.

When we got home, my boys were already here with the game on TV.

It was a good night in San Francisco. For the second straight game, facing elimination and therefore the end of their season (and story) the Giants clobbered the St. Louis Cardinals, 6-1.

Now the improbable is reality -- if they beat the Cards one more time (tomorrow night), the Giants will win the National League pennant and proceed to the World Series for the second time in three years.

The reason baseball can only be understood as a book is because it involves a much longer season and many more games than any other sport. The players arrive for spring training in February, and the lucky ones, those that make it to the World Series, play into late October or November.

Tomorrow will be the Giants' 174th game since the season began in April. (Those spring training games do not count.)

If they win it, they will play at least four more and possibly seven. Their opponent will be my second-most-favorite team, the team of my boyhood, the Detroit Tigers.

If you are counting, that is a book with around 181 chapters, each about three hours long. Few chapters require three hours to finish, so maybe 181 movies is a better analogy.

Imagine a narrative so compelling that you would watch it 181 times in one year!

Now that is a major investment of your time and energy. (Trust me, it helps to be either unemployed or retired.)

At times like this, I realize I am lucky to not have a girlfriend, unless of course I should be so lucky as to have one who truly appreciates the nuances of this great, great sport.

It involves so much math, so much psychology, and such civic engagement. It is about a sense of place -- Detroit, or St. Louis, or San Francisco -- all great cities in wonderful regions of this great country.

As I was writing this post tonight, I was also watching one of my favorite movies, "Lost in Translation." In that movie, the character Bill Murray says something about getting to know your children.

I do not recall the exact line, but it is something like getting to know the "most amazing people you ever will meet."

Children have so much influence over their parents, although it can take half a lifetime or more for them to realize that truth.

The reason I am a Giants fan is my kids. They all were born and have grown up here, so this is their team.

I didn't become a Giants fan until I was in my 40s; until then it was all Tigers for me.

Then the narrative changed, as I adapted my hopes and dreams and aspirations to theirs. As late as 1984, when the Tigers last won the World Series, my older kids rooted for my boyhood team along with me, but Michigan is a long, long way away from here, and unfamiliar territory for the most part to my children.

They are San Francisco people with San Francisco values. They like the fog, the cool ocean air, and they value the kind of diversity we hold dear here on the Left Coast.

Michigan often seems a long way away to me now. A place that is fading from memory, especially because I have not been able to visit it for almost a decade now, and unless my finances improve, I may never see its green fields and blue rivers again.

It may end up lost in the fog of a lifetime of foggy memories.

If the Giants and the Tigers are to meet in this year's World Series, which we will know by this time tomorrow, my old and present self, and my younger self will meet and have to have a conversation.