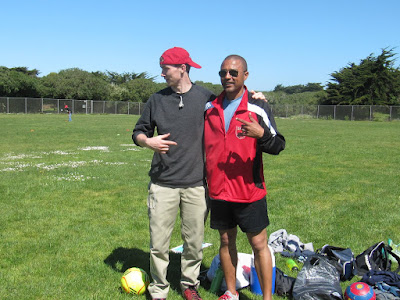 Aidan and the great Seals' coach, Shani, at Beach Chalet this morning.
at April 21, 2012 No comments:

The Life of a Butterfly 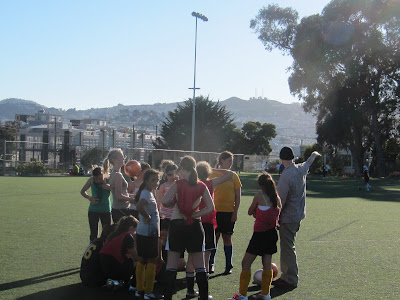 Maybe it's the weather. Or maybe the known structure of life on the weekend. Probably it is the disruption of a week that felt long, as a large percentage of the work I've been doing the past fifteen months melted away into ambiguity and silence. I don't deal well with silence. Ambiguity is fine; silence is not. But by mid-afternoon, all anxieties and fears had melted before the glorious heat. It was 80 degrees in the Mission and girls were wearing sundresses or shorts. Everyone was out for a walk. As my son, the coach, prepared his team for their upcoming game less than ten hours from now against a perennial power, Jamestown, and I watched, everything ailing me mentally and physically seemed to drift away like of of those wispy clouds my Grandson finds so mysterious. In this new mood, all seemed possible, once again. I'll start a company or write a book. Seeing the world through the fresh eyes of my children and grandchildren, I'll rediscover magic and find a way to spread magic. Life brings you a lot of magic but also a lot of poison. You learn how to deal with both. The extremes, in the end, turn out to not be the problem. They are the easiest things to handle. For a person like me, at least, it is the hum-drum, ordinary, daily events that prove most challenging, and I often wonder why? I repeat like mantras the lessons I've learned from others -- "all we have is now," or "live in the moment." But this can prove hard to do in the reality I face. Some very ordinary moments prove to be truly terrifying. My only advice to myself is to hold on and wait for the next moment, and if that one is no good, the next. This can be, on occasion, quite a struggle, but I've discovered coping mechanisms, some of which I'd be glad to share if anyone reading these words ever encounters a similar abyss. Today, the sun came out, the sky turned crystal, the winds fell, the flowers bloomed. I watched a Monarch butterfly circle under my back stairs, at a low moment when I couldn't locate any meaning for why I was standing there, in my slippers, seemingly with nothing to do. Of course, I had many things to do. We all always do. But life gets busy and then it gets quiet. A butterfly's life is brief. In the period she exists, she brings beauty to our common world. I witnessed the beauty of this one butterfly today when I stood helplessly confused. Maybe that was the turning point. Or maybe it was reconnecting with the bustling world my children give to me. Outside my daughter's school, searching for her face, seeing her smile. Or, maybe a bit later on, when she and her brother, the coach, were talking about what it is like for kids playing sports when their parents don't show up for games. This part of their conversation hit me in the heart, knowing how many kids never see their parent on the sideline. They both brought me into the conversation very consciously. "I hardly ever remember a game when you were not there, Dad," said my son. "Me neither," said my daughter. -30-
at April 21, 2012 No comments:

The Smiles of the Future 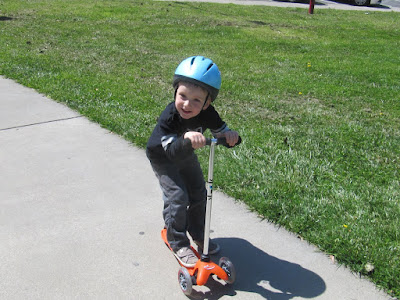 If a relatively long life has taught me anything, it's that when you are having a bad day, hold on and see what tomorrow brings. This can be applied in a longer time context.

If you are having a bad week, month or year, hold on. Things may well get better soon.

Today was a day of rest for me. Nothing much has been going well in the "professional" realm lately, nor in the "personal" realm. I suppose you could say I had become a bit depressed.

What I decided to do about this was visit my nearest grandchildren, just across the Bay, a lovely blue-eyed 3-year-old and an equally lovely brown-eyed 1-year-old. 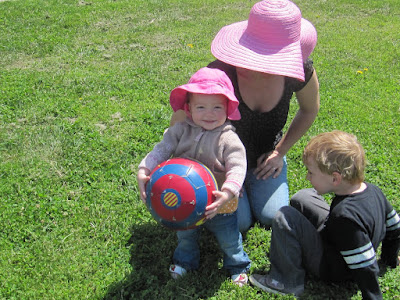 They didn't disappoint. Their smiles lit up my day and their stories helped me remember my own. 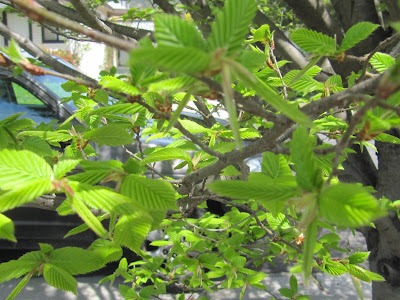 As we got home from the park, I noticed these fresh green leaves on a tree nearby. Spring. New life. Hope.

Don't ever give up. Look into the faces of young children to see what the future holds...

It's tax day tomorrow, which usually means a long lineup at the post office branches that stay open late to handle the crush. I mailed my returns off this afternoon.

I'm reading White House Burning, which I recommend to anyone perplexed by the ongoing political divide between those on either side of the national debt debate.

This also involves the even fiercer debate about the proper size and role of the federal government, including the extreme views of those like Ron Paul, who would essentially like to shrink the monstrously huge Uncle Sam down to more the size of a pygmy, I suppose.

I'm not accustomed to taking sides in this philosophical debate, because I partly agree with both camps. The federal government is too big, unwieldy, and intrusive.

As one who has been abused by unjustified, yet hard to win IRS audits, I probably resent big government as much as any American. Plus I hate financial waste of all kinds, and I have observed first-hand as a former Washington D.C. bureau chief how much bureaucratic waste chokes the federal agencies inside the Beltway.

Still, I have a heart as well as a brain and it is easy to see how much human misery resides amongst great wealth here in The Land of the Free. Too many people simply cannot compete according to the way the rules of the game are set up in the USA.

And the rules are too often rigged by those smart and aggressive enough to do so.

The kinds of abuse we've witnessed of ordinary people by financial institutions in our time is staggering. Basic fairness has been abandoned by those seeking only to enrich themselves.

Government regulation -- or rather the lack thereof -- is a significant causal factor.

What we badly need is a new kind of resolution of the ancient debate that, as this book documents, dates back to the founding of our Republic. Hamilton v. Jefferson, it could be called.

Most people adhere to one extreme or the other, I fear, when both are both partly right and partly wrong. When Obama was elected in 2008, my great hope was that he would prove to be a great consensus-builder.

The gravity of our economic problems were easily apparent then. Four years later, IMHO, our problems are much, much worse, because no consensus has emerged, just more echo-chamber extremism on both sides.

Once he dispatches Romney this November, which will happen if for no other reason than the Gender Gap, Obama needs to step up his game, and start acting like the centrist he truly is.

We need a President who both slashes government waste and entitlements, leads the fight to fix Social Security and Medicare (a combined one-third of the overall government spending), resolves the debt problem, and rights the course going forward on our growing annual deficits.

It's no small challenge. But that's what is at stake in this election, and there is no evidence Romney is up to it. One can debate whether Obama is, either, but at least as a second-term incumbent, he will have a much better chance to take the requisite political risks than another raw beginner.

At least that is my take.

Closing Out a Weekend 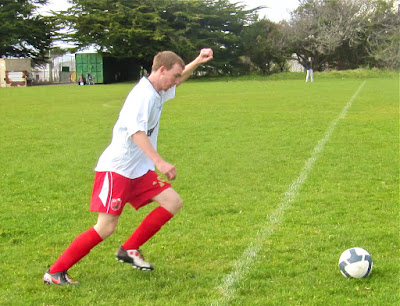 Ending up an emotional weekend, I drove my 17-year-old to a scrimmage out at West Sunset. As we arrived, he gave me his earring and jogged out to join his teammates, the Seals.

There were three 35-minute periods. The opposing team did not have quite enough players, so one Seal had to go over and help out each period. In the first, he played his usual center back for the Seals, and they won easily, 3-0.

In the third, he joined the other team (thus the white jersey in the photo) and tackled a few of guys who are normally his teammates, drawing smiles and handshakes all around. The Seals won this one, barely, 1-0.

Of course, in the third period, I was rooting against the Seals, not for them, which was an odd turn of events. As the parent of an athlete, like every other person in this situation, I chose my son over his team, even in a meaningless scrimmage.

When late in the period, he got the ball and decided to make a run at his teammates by racing the length of the filed right in front of us (see photo) and try to score, I got as excited as if it were a real game and he was a striker.

He didn't score, in fact he didn't even get off a shot, because his usual co-center back blocked him effectively.

Afterwards they both smiled.

Such is sports. Far better, in many cases, than "real life."