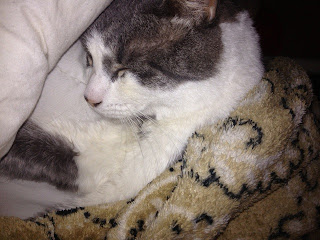 Since he's always been a picky eater it took us a few days to realize Biggie was ill. Tonight he is in the pet hospital, being treated for auto-immune disease. He presented as dehydrated, thin, and extremely anemic. His immune system has been destroying his red blood cells.

He's being re-hydrated via an IV, and his immune system is being suppressed with steroids. After that, if he stabilizes, he will be able to come home, but may need to take steroids for life.

We'll know what his chances are over the next 48 hours. The bill is shocking. Somewhere around $1,200. The hospital gave me the option of putting him down, but I couldn't do that because of the kids.

There is no way to know whether he'll make it no matter what we do. I decided to try and save him. God only knows how I will pay for this.
at March 02, 2013 No comments: 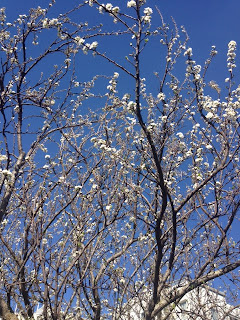 The past few days, spring has arrived here. A long stretch of cold weather gave way to the kind of sun and warmth that brings out the blossoms on fruit trees and the wildflowers on the hills. Spring training has begun in baseball; house sales will probably start picking up.

Wild animals herd their newly born, Homeless people appear back on our corners, as the emergency shelters close.

I continue to meet entrepreneurs every week. Their energy and passion for what they do amazes me. They face so many obstacles to have any hope of success.

I wish their approach would prove contagious -- I'd like to catch the virus from them. What holds any of us back from taking big risks and seeking big rewards?

That is the question facing me this spring of extreme discontent.

My wish? That by the time the plums arrive I will have developed to a new level and pushed myself to be more like them
-30-
at March 01, 2013 No comments:

Helping a teenager learn to drive is almost the opposite of teaching an adult. The adult wants to learn the rules because she wants to become a safe driver, avoid tickets, and become more self-sufficient.

While the teen hopefully shares those goals, he's interested in knowing how to pass the driving test. High school is all about passing tests; kids this age often fail to grasp the larger issues involved in learning because the reward structure they are familiar with is all based on that.

If they can goof off, arrive in class late, slack off and still pass, or even get A's, they think so much the better.

Most adults grow out of this stage; we're forced to. We know that unless we truly know how to do something well, we're at risk of failure in ways we find unacceptable.

Teens take risks, they often fail at things, they are exploring boundaries.

Putting them behind the wheel of a car ought to give us pause. Where I grew up, in the country, an appalling number of my peers died in car accidents. Cars are safer now, but the danger lingers.

This is one reason I applaud the efforts by Google and others to perfect a self-driving car. In the future, with sufficient technology, maybe we can take the very real and tender human element out of the driving picture.

It's heresy to those who grew up where I grew up, but it's human progress.

I yearn for the day. 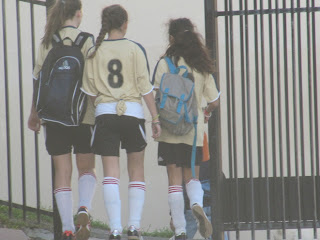 Heading into the gym yesterday afternoon with her teammates my tall young athlete was laughing and joking -- she stays loose before games. 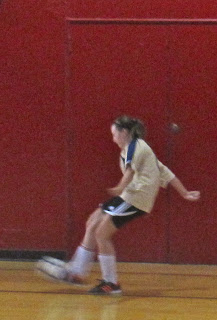 Though she's still learning the game of futsal, inside soccer, she's rapidly developing into a much better player with a strong kick. Yesterday she scored her first goal! A long rising shot that the goalie could only get a finger on as it blasted into the net. 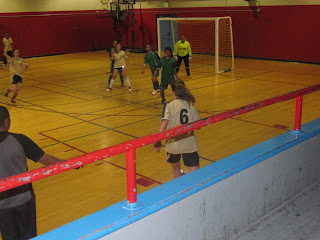 That seemed to set off a lightbulb in her head; from then on she played on fire, just missing three more goals. All the while playing as a defensive specialist, not a striker out in front of the opponent's net.

So there were all very long shots that the keeper had a good chance to stop -- still any of them might have crossed the goal line but for excellent saves.

It is such a joy as a parent when your child makes that next jump in any endeavor to reach a new level.

That was what I witnessed yesterday with my daughter. Others noticed as well. Her coach left her in to play many more minutes than usual. Other parents recalled her nickname when she was little -- Thunderfoot -- and we brought it back into use in the stands while cheering her on.