Fog so low and thick the past two days it feels like night by mid-afternoon. A lost, red-tailed parrot roamed the neighborhood, looking for a friendly shoulder to land on.

The day before yesterday I watched a Monarch butterfly visit our pumpkin vines, which are huge. The day before that I had tea with a friend in the garden -- that day was sunny, and she reminded me that a few years back I made plum jam from the tree were sitting under.

She brought me a peach pudding she had made.

Tonight news from my daughter in the East Bay that her sunflowers are blooming.

Yesterday, after lunch with my three teens, I bought the oldest of them an early birthday present -- an 80 pound punching bag. Then we cut a small rectangle through the sheetrock to reach an ancient wood beam, where we could secure the metal unit holding the chain to the bag with long screws.

It took us multiple tries before we got it right, and he was able to borrow a power drill from a neighbor -- otherwise we never would have succeeded. He showed a quick and practical mind when the bag disconnected twice from the unit, and reduced the number of parts, eliminating the problem.

He impressed me in the process.

His great grandfather and grandfather were good at such things -- practical things, carpentry, home repairs, and the like.

I'm terrible at that stuff, which has always been an area of low self-esteem as a result. Why did the pragmatic gene escape me?

They all know the routine. Dad gets very tense and almost angry, fearful and frustrated that something is broken or not working or needing to be repaired. He can't seem to understand any type of instruction manual, no matter how clear or well-written.

He is close to freaking out.

All three boys, by contrast, have the ability to stay calm and think clearly. They don't fight the demons that first started visiting their father when he was about five, trying to help his grandfather, failing, and being rejected by him as a result.

Instead they have to fight their own demons, the ones that started showing up as they dealt with their own father's many weaknesses.

It goes on like that, you see, generation after generation. We are often our grandfather's sons (or equally forcefully, not), much more than our father's. A similar thing can be said about girls.

Boys and Girls at the Movies

There's a scene in "Dark Knight Rising," the latest Batman movie, where our hero impossibly escapes from a prison that is, literally, a deep hole in a desert far, far away.

One scene later, he is back in New York to avert an unimaginable nuclear disaster from destroying "Gotham."

On our way back home from the movie tonight, my daughter asked the obvious question, "Wait, how did he get back to New York?"

The boys got mad at her for this, so I intervened, perhaps a bit too strongly.

"Everything about this movie is fiction. None of it is possible. So the filmmakers don't have to solve issues like that. Of course, a guy in some remote place, without money or a passport, could not get a flight to the U.S., but nothing else that happened in the movie was realistic -- or even possible -- either."

The boys got mad at this, but I had to defend my daughter's questioning, as she tried to figure out the strange missing links in the story.

She brought up more, I agreed with her, but all too son it was time to drop them all off at their Mom's house, and for me to drive away into the night in silence.

There is a lot more to be said about all of this.

All in the Numbers

At this point in the year, baseball serves as the anchor for me. Partly due to the odd climate in San Francisco during summer (our coldest time of the year, offset by occasional periods of sun and heat), it gets disorienting. It's easy to forget what month it is, or even what day of the week it is. Everything just flows together as if swirling past in the ever-present fog.

But baseball helps bind the days and weeks into useful patterns. Our team, the Giants, are locked in a gripping pennant race wit their arch-rivals, the Dodgers. Tonight, the boys and I watched the Giants win a big game and retake first place. They also welcomed a new slugger to the team, Hunter Pence, just acquired in a trade.

He'll be in the lineup tomorrow.

Baseball is a game of ups and downs and endless numbers. It is a statistician's dream. You can love the sport without its numbers, but you'd probably never really understand it very well. Math majors need point no further than baseball to convince kids that math matters.

That even works in some cases.

Another thing about summer is the kids are off school, so today we did one of our favorite things and went to a local place for brunch. They've been lobbying heavily for me to adopt a cat, and they drove themselves to distraction imagining what we would name such a creature -- assuming I ever agreed to get one.

Some of the names they came up with were pretty funny, to be sure. Mostly I just love seeing them happy and enjoying each other's company.

I had a major misunderstanding with somebody recently. It bothers me. It was mainly miscommunication, but the underlying issue was a sense of fairness.

I help people all the time -- I love helping people. I give my time and expertise, such as it may be, away freely. Virtually anyone who shows up and asks for writing or editing help gets a friendly reception from me.

But when money is involved, I can become touchy. I've prided myself on being a pretty good negotiator when a salary or contract is involved. One time, when my boss offered me a certain salary figure, I countered that it might not be viewed by the executives I was supposed to manage as high enough to command their respect.

My boss thought about it and offered me 27.3 percent more, on the spot.

That was a figure I could not refuse.

In this recent situation, I casually agreed to help someone raise money, and with one email, I connected him with someone who immediately agreed to invest in his company. He said "I owe you big time," which was true.

So I articulated what "big time" would mean in this context.

Others have compensated me generously when I helped them raise money. That is a very different field than writing or editing. This particular beneficiary took offense, acting as if I had had "ulterior motives" all along.

The whole thing blew up into a big mess until I told him I would not accept anything back from him even if he offered it.

After all, all I have is my reputation as a person of high ethical standards -- once someone casts aspersions on that, my ability to function narrows considerably in the highly competitive world of advising tech startups in the Bay Area.

I'm still reeling from this experience, and trying to figure out what it means. Maybe I just trust people too easily?

Probably. And that has often been my undoing.

My new ebook has led many old friends to contact me and send their best wishes, which I appreciate. Some of them are even ordering the book and reading it.

I hope a lot of people do. It would take many tens of thousands of people to buy the book before I would receive any meaningful compensation (at 75 cents per book) but however many read it will at least get a sense of how I view the technological revolution reshaping life in our time.

This story is bigger than I can capture, so far. It is enormous. I struggle week after week to make the best sense of it I can. The latest book is my first attempt to articulate some major patterns, but in that regard I have much work to do going forward.

In the way that one thing affects everything else, and on and on, the fate of the Giants this fall will likely help define my creative work.

If that is strange to some, then all I can offer is it's all there in the numbers...

With the Wee Ones 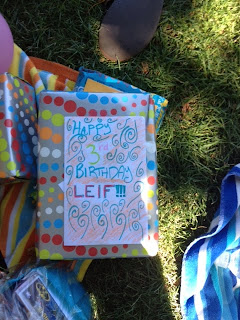 That's how my own Scottish grandparents would have described it yesterday as we gathered in a Sacramento park to celebrate the 3rd birthday of Grandson #3. 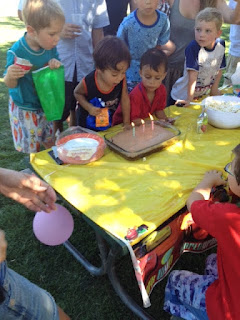 He's an adorable little tyke, a chatterbox (who used to barely speak a word), and a true character who sees the world through his own unique lens. He uses adult phrases like "Let me get back to you about that," and in that way reminds me of his Mom at this age. 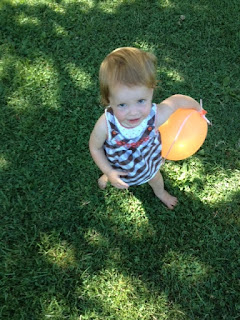 His 16-month-old cousin is quite mobile these days and just starting to talk. She wandered all around the perimeter of the party yesterday, exploring everything in sight. It was hot, very hot, and the kids all had red cheeks from the heat, even with sunscreen.

The gift of being able to get to know your children's children, at my age, while remembering your parents' parents, is truly fabulous. Some 130 years of history with me sitting squarely in the middle of it.

My grandparents were born before cars were invented; now I have grandchildren who were born after the iPhone was invented.

Those two inventions are actually comparable achievements -- the iPhone is in the process of remaking the world in much the way the automobile did in the last century.

That's one of the themes in my book, Thirty Startups to Know Now.

I find that elsewhere in the country, many may still underestimate just how profound the transformation of life as we know it is occurring thanks to the emergence of small, powerful digital technologies that can help us do everything we used to do much more quickly and efficiently.

Not that there aren't dark sides to these same technologies, as I often mention. Especially social media like Facebook, search engines that enclose us in the "filter bubble," or apps that distract us when we should be concentrating on something more basic, like driving.

But the upsides promise much more than the down.

All of the world's cumulative knowledge at your fingertips in your pocket.

Nothing any of our granparents could even have imagined.