In sports, as in life, it's not always fair. Those of us parents of Palomino players over eight or so seasons could be forgiven for hoping the girls might win the championship this spring. Coming into today's game they were unbeaten, as was their opponent. The winner will probably finish in first place after next Saturday's final games. 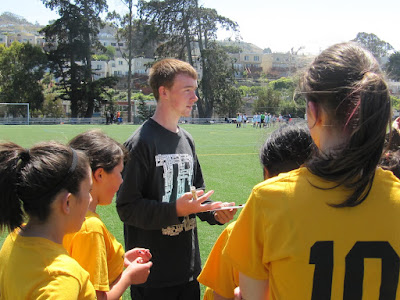 Before the game, the coach set the lineup and also had some bad news; due to a technicality that has never before been enforced, he would have to go across the field and coach from the parents' section. The reason for this was a creepy ref, who seemed to arrive with an agenda, determined to be anal-retentive and confrontational. 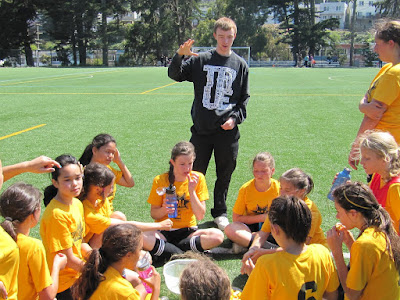 By half, when he rejoined his players, they were down 0-2, and one of the goals had been counted by the ref despite an uncalled offside violation. He told them how to adjust and come back. Then he had to depart to the parents' side once again.

The girls responded to his instructions and played a furious second half, finally scoring and drawing within one of a draw. Alas, they fell short and lost 1-2. 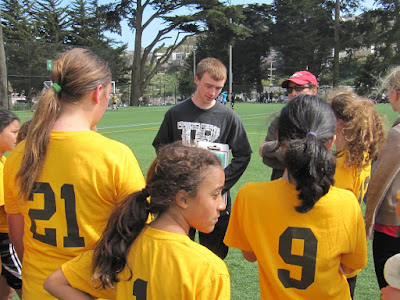 Afterwards, their head coach rejoined the team, and spoke. "In my book, you guys won."

In my book too. But sadly, a bad ref probably determined this game's outcome, so they will now finish with a winning record but not an unbeaten one, officially.

The coach and the girls all seemed fine, actually. They'd competed well under difficult and suspicious circumstances. Most suspiciously, the ref had allowed the other team to play much of the first half with an extra player, illegally, until one of our parents noticed.

Once we protested, the ref decided not to punish the opposing team and let both their goals stand.

Who knows what was happening in the background here. After all, shit happens, for all kinds of reasons. Lots of people cheat. Just look at Wall Street!

The season ends next weekend. If the girls win their finale, out at Beach Chalet, they'll have had by far their best season ever. 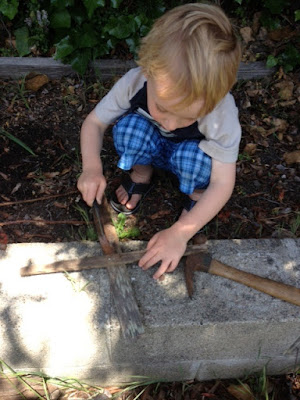 The task, as determined by my grandson, was to build a scarecrow. We did the best we could with materials on hand. 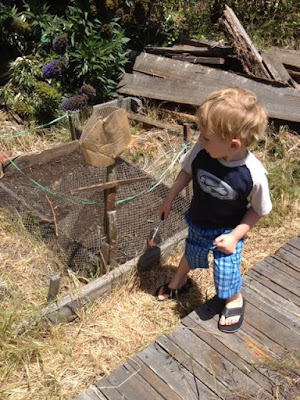 The result wasn't especially scary. The lone bird, a large male bluebird, that visited the garden afterward landed on its head and proceeded to eat some of the seeds we were trying to protect. 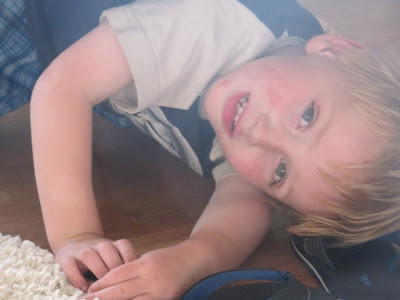 Afterwards, Luca hid a chocolate bar under a chair. We ate dinner outdoors, out back. As the evening came, many birds came into the yard, singing.

None landed on the scarecrow. None ate our seeds.

It was another hot day in the East Bay. A good day.

Visions In the Winds

Our local heatwave is bringing out the best in our backyard; it's a virtual jungle. I can stand in many parts of this normally exposed urban garden and the trees and plants are so high and thick with leaves that no one in the buildings around would even know I was there.

The butterflies know, however. As do the birds.

Watering everything, protecting it all from the sun, I begin to daydream. I'm in other places and other times.

Squinting, through the greenery, I begin to see apparitions. I imagine a lovely form floating dreamily on the afternoon breeze.

Everything in this vision is so real it's palpable. The long hair, the smooth skin, the gentle grace. It is the ultimate female, the goddess, the one a male has always been seeking.

Suddenly, I snap back to attention and realize I have probably over-watered one poor little plant near me. "Sorry about that, chap," I say in Australian, as I lift his pot and dry him out in the wind and sun.

It's not so much that I don't enjoy preparing for audits in the sense that employing an attention to detail and adding up numbers isn't fun for me. It actually is fun -- since I was a boy I frequently have made up and played mathematical games that are probably evidence of borderline OCD behavior.

And then there is my proclivity for Fantasy Baseball. This is an online collective game based entirely on numbers, and I have played it for a decade.

A former college friend actually invented the "sport;" technology has made it accessible to anyone.

So I pass the hours preparing my fantasy baseball team for another night of battles and locating and calculating numbers for that loveable old IRS.

Then there is the writing and the editing. Multiple clients these days; lots of work.

Then there are the kids. It comes back to math. My daughter and I struggle with her math homework. "You're so impatient these days, Dad."

Suddenly, I know the toll it's all taking on me. That my 13-year-old suffers from it shows just how cruel our government's predations on its own citizens truly are.

Call from one son, he is sick, so I pick him up from school. It's a hot day but he is bundled up in a sweatshirt and wearing gloves, clearly having chills (thus fevers) and a very sore throat.

We've had a lot of this this spring. It's disruptive, to his day and mine.

Back home, he falls asleep and I keep working, working, working, alone on these damn audits. It's an odd ordeal knowing you are innocent but having to prove it. It's a horrible experience, actually, very lonely to prepare for battles with your own government.

Honestly, if we had a straight forward tax code, as opposed to the one we are forced to deal with, in all its complexity, people like me would never be audited because everything would be simple, easy and transparent.

That's right, I am blaming the U.S. government for my audit. It's their fault. And millions of other little people like me are suffering the same fate.

Shame on you, Uncle Sam! You are a bully.

I can let that go, of course, because there are other parts of life. Even as I face being robbed by my corrupt uncle, I can hear the birds sing, see the butterflies flutter, and appreciate my children's dilemmas.

One has a science test tomorrow; she studied hard. One has a math test Thursday that he must do well on; he's in a precarious situation.

The Giants beat the Dodgers tonight. That is a sweet thing.

I'm constantly searching for the return of balance to my life. For the threats to be reduced and for the dreams to return. I want to start dreaming again.

It's been way too long.

Off to the Future 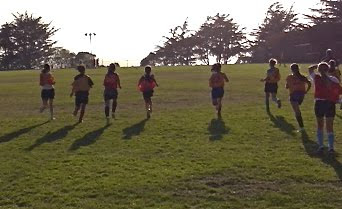 This is the last season for my daughter's soccer team; too many of the girls are "aging out," so her one option is to commit to moving up, like her brother-coach did years ago, to the "club" level.

We've found a club team that will give her and three of her seventh grade friends a chance to do just that.

Today, in the heat, the girls practiced with this team. I like the coach, he makes them run just like their current coach does. He understands how important conditioning is as you move up in soccer.

Although she's been negative about this option until tonight, after we finished her math homework, she told me she is "leaning toward" saying yes.

I hope so. A good choice for her, I think.

A baked potato in the oven, that would be comfort food. Meatloaf as well. Perhaps only those of us who grew up in the Midwest know what I am talking about with these particular choices.

Why do I need comfort? Why do any of us?

This Sunday night, I have no real complaint. Life is life; there's always a mixture of good and bad in there, so your perspective depends on how you think about it.

So I'm just being nice to myself tonight; I'm in a very good mood.

Not because I had a ton of fun this morning, preparing for one of the two IRS audits that require me, day after day, to reconstruct the year 2009.

I don't know if you have ever reconstructed a year, for any purpose, but I have many times, mainly in the context of memoir-writing, not IRS-defending, although lately it seems I've had to do a lot of that too.

Well, I had a job for the first week, then was laid off. The startup that employed me didn't survive past that summer.

I succeeded to an extent, but it was not a very successful year financially. Thus the IRS audit is ironic. I didn't have a very good year, despite a ton of effort, which included around a dozen business trips all over the country.

My kids were all three years younger than they are now. We still had soccer games, that's for sure.

So the rest of this post will concern soccer, or rather what it is like being a soccer parent. 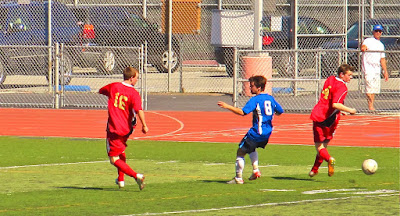 My son played in the extreme heat south of here today and his team won, 1-0. As usual, he played well, with a few lapses, but nothing that led to the other team scoring against his keeper.

Meanwhile, in the stands, other parents and I were both cheering our boys on and sharing our angst about so many issues -- standardized tests, the poor quality of public education, the dilemma of helping our sons figure out how important their athletic ability should figure in their choice of colleges this fall.

We are the parents of high school juniors. 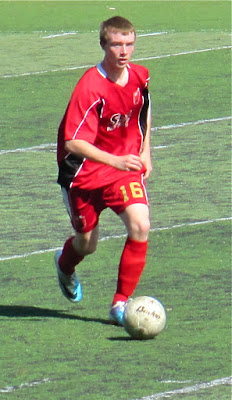 At one point in today's contest, my son sustained a major collision with an onrushing player, but he walked away healthy.

That's another thing we parents share -- a fear about our kids' health, as they compete at higher and higher levels, where the game becomes almost unbearably physical.

Late in this game, an awful thing happened. One of his teammates was caught in a three-man collision and had to be carried off the field. Later he had to be carried (by an ice cream truck) to a car waiting to speed him to a hospital.

He appeared to have suffered an extremely serious injury, probably a broken ankle.

This event cast a huge shadow over our kids and their victory. It is precisely the kind of disaster we all fear most and which, at times, seems inevitable in kids' sports.

Maybe the reason I seek comfort food tonight is not for myself but for the family of Aidan's teammate. I hope he is okay, can heal quickly, and that this doesn't end his ability to keep playing the "beautiful game."