Helpful Moments in the Rain

Yesterday was such a weird day on many levels, both good and bad. Finally, I got to see my youngest after her adventure working in a village in Costa Rica on her school trip. She told me she stopped being a vegetarian on this trip, and that the meat tasted so good down there.

She also taught kids in the village some English words, performed a bunch of physical labor, and explored the beautiful hilly tropics of one of the most amazing environments I've ever seen, personally, in Central America, or anywhere. (It rivals parts of Indonesia and Malaysia.)

But yesterday also brought a driving rainstorm and it was sooo cold in the morning.

When it came time to drive downtown to meet my oldest and pick up her two kids for a babysitting session, I was derailed by a woman asking for me help to jump-start her car. So I said yes and when we hooked up the starter cables, one or the other of us, probably me, made a bad choice.

As I tried to make the charge from my car go to her car, I saw smoke billowing out of both vehicles -- never a good sign.

When we both got out behind our drivers' seats we surveyed a sad sight -- the cables had totally melted.

Her battery was still dead and now mine was too. I texted my oldest that I might not be able to get downtown, and told my youngest, as I rushed inside to grab some pliers to remove the melted cables from our batteries, "Shit, something bad has happened to my car."

As I rushed back outside with the pliers, also trying to call my auto insurance company for roadside assistance, the woman I had been trying to help, just smiled sympathetically: "Oh no! And all you were trying to do was help a woman in distress!"

My Toast to New York 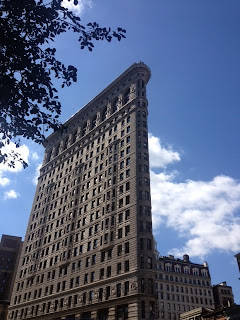 If that turns out to be my last trip to New York for a long time, it had the usual high points and low points that have characterized my visits to our country's largest city for decades.

The day before the trip, during a dental appointment, I learned that my dentist has never been to New York. Not even once, even though his favorite camera-parts supply store is there, near the Empire State Building.

He's a pretty well-traveled guy, I think, so I found this revelation incomprehensible. According to Wikipedia, somewhere close to 50 million people visit NYC every year, 80 percent of them Americans, with about ten million foreigners in the mix.

That means that the roughly 314 million people in the U.S. currently account for about 40 million visits to New York during the course of the year, although many of those people probably visit more than once.

I'm just going to wildly assume the average number of visits per year per person is 1.5 which would reduce the number of individual American visitors to about 27 million, or about 8.5 percent of the population.

Given that the vast majority of visitors no doubt are regulars, i.e., visiting at least once every few years or so, I can now see statistically that probably a minority of my fellow citizens have ever been there!

I'm guessing maybe a third of the population.

After all, less than that (roughly 100 million) fly on an airplane each year, and JFK is only the sixth busiest U.S. airport (Atlanta and Chicago are the top two). Almost half of the 47 million flying into and/or out of JFK are foreigners, however.

As for the metropolitan area's two other airports, Newark ranks the 14th and La Guardia 20th in airport traffic, and the bulk of those are on domestic flights. Not everyone landing at Newark visits one of New York's five famous boroughs, however.

Using various assumptions, including multiple visits, etc., I'm again ending up with somewhere in the neighborhood of 25-35 million domestic visitors to what early in the 20th century came to be known as The Big Apple.

Besides me having fun with numbers, where is this going? I figured that for those who never visit Manhattan, specifically mid-town and downtown, I should provide a little tour guide information.

The cabs running into and out of midtown cost $57.30 plus tips. The best deals you can get on a two or three star hotel run close to $200/night. Restaurants are pricey as well, though there is always the option of a pretzel of hot dog from a street vendor.

People tend to dress well in Manhattan. Every block or so you pass a woman or a man who most likely is a fashion model. At least they have the looks and the clothes to play the part.

You'll run into the famous on the streets of New York, just as you will in Beverly Hills. New York is where the famous and wealthy live, especially on the upper east side.

I once visited David Rockefeller's place on the upper east side. That's a story for another day.

Over the years, the poor and homeless have been more or less pushed out of Manhattan. You don't tend to see a lot of desperation near the main tourist destinations, though trust me, it's there, in the shadows and around the edges.

Like San Francisco, New York is a getaway city, in its case to Europe; in SF's, Asia. There are always a lot of folks passing through, including the world's richest and biggest spending tourists.

Everyone knows about theater in New York. The theater district is just off Times Square, which everyone also knows about.

The media and advertising and book publishing industries are headquartered in Manhattan.

But here's something you may not know. Over the decades, Manhattan has become a friendlier place. The old joke  -- that if you need to approach someone there for help you should self-protect, as in "Excuse me, do you know what time it is or should I go fuck myself?" -- simply is no longer true.

Nowadays, people politely tell you the time, or whatever.

There's still a ton of aggressive people trying to make it to the top in New York. Don't get me wrong. But generational changes have softened the culture, at least from the perspective of one who typically visits twice a year.

That may now change; I may not get to visit much more, and if not, my ability to generalize will be lost.

As for now, I retain a fondness for the place, its people and institutions. And for a small number of very special people indeed, who I'll miss if I no longer am able to visit.

A toast to New York!