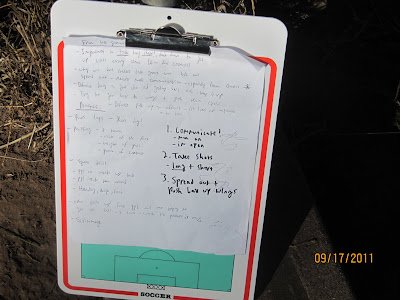 Lovely weather out in Golden Gate Park today of the second game of the season for the U-13 girls team and their new coach. He drew up a game plan of all the things he wanted to remember to tell them and wrote everything out on his clipboard. 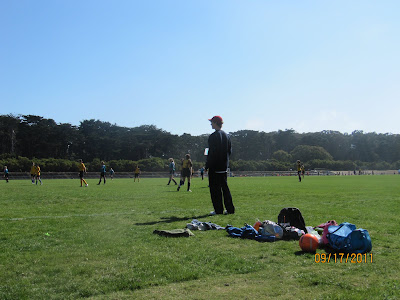 The never gave up against a better team but lost in the end, 1-2. But he coached well, they played well, and they're 1-1 on the season now. 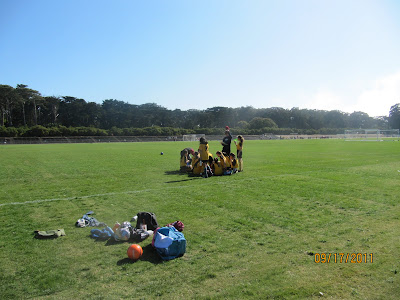 Afterward, he and I hit the highways north and east on a short road trip. Sacramento tonight, Reno tomorrow. 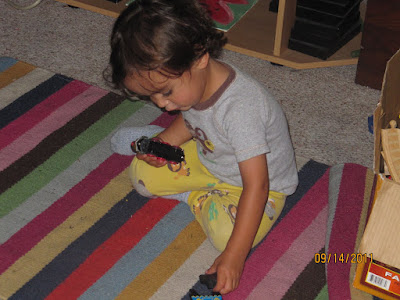 My youngest grandson, at two, loves to play with trains and blocks. Tonight, I gave him a small wooden horse to carry around and he kept saying "Horse jump table." Apparently, this is something he saw at the State Fair recently. 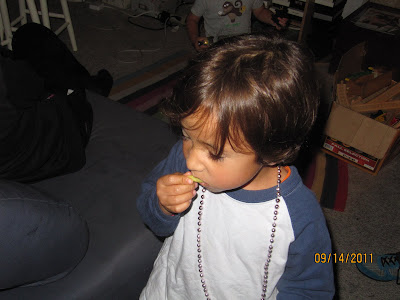 His big brother, at four, eats like a bird, and I thought I wouldn't find anything he'd like until he found some "healthy" chips. Those he liked.

Their two big teenage uncles came over to play with these guys during an impromptu family gathering this cold, Wednesday night in SF. Big guys and little guys. Guys of all types and sizes, but guys for sure.

Pizza, carrots, soda, sports talk, music talk, school talk, girl talk. Lots of chatter. Maybe males do talk as much as females, but only once we have gathered in sufficient numbers to set the tone. My poor daughter, Mom of these two beautiful little boys, was the one female among six males, including her husband.

But she's used to it, and with a third boy growing inside her, by later this fall she'll be the mother of a hat trick of boys. I see a lot of soccer games in her future!

Not Really About Soccer

Yes it was another good day for a certain high school in the Excelsior, which now is 5-0 so far this season.

Next, they face a renewal of their arch-rivalry from last year's championship game Thursday with another 5-0 team. 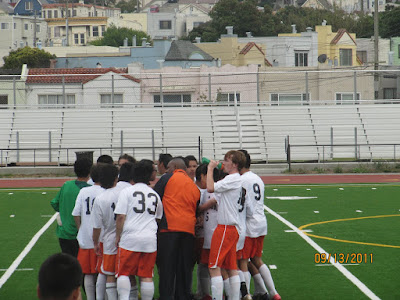 Anticipating that game for the next two days will be sweet. Watching my son compete in these high school games is, as I am well aware, as good as it gets...and as good as it will ever get.

Yesterday, a talented young woman showed up at my front door, as expected, to film an interview with me about events that happened over 30 years ago. Twice last week, I spoke to students in local colleges about journalism past and present.

Later this week, I'll go on a local radio station to talk about the same topic.

These days, there are a regular stream of requests for me to talk about what has been a very long life indeed in the world of journalism. This is what it means to be an elder, of course, and I understand and accept that role.

But even though my body is old, there are few moments when I, my spirit, feels old.

When it comes to watching kids play soccer, or interviewing entrepreneurs, or (on the occasional lucky day) hanging out with a much younger, beautiful woman, I somehow don't feel like the old man I most certainly am.

So what's up with that?

Yesterday I also hung out for a while with two young men out front who were friends, perhaps relatives, of my murdered neighbor. They were both struggling to make sense of this awful crime.

One of the young men would be called black in this society, the other would be called Latino. To my eyes, they are both beautiful young people, somebody's sons, and somebody else's future fathers.

The dark-skinned man felt like talking. "I wonder where he is now?" he said about our fallen friend. "He got too big a heart to just be dead. He got to be somewhere. Where he is?"

The lighter-skinned man's eyes were filled with tears and he had no words to offer.

I tried my best to answer the first man's question. "Nobody knows what happens when we die," I offered. "People believe all sorts of things, but I think we just don't know."

Then I said this: "No matter where he is, he's still alive for you, right? You don't have to let go of somebody you love just because they are gone. And he was one of those people who always had so much to say to all of us, maybe all we should just do is remember that, and keep talking to each other, also."

Just keep talking to one another. Maybe that is a lesson for all of us. Because sooner or later, our voices will be stilled, too, and wouldn't it be a pity if we stopped talking too soon?

(Note: This post is part of a series of articles by various writers organized by my friend Tyge O'Donnell. I urge anyone interested to read them all at his site, The Neon Lounge.) 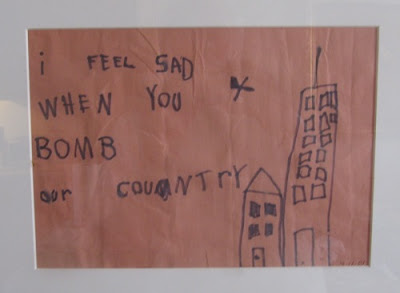 Ten years ago, my wife and I owned a house in Noe Valley, our kids were 7, 5 and 3; and I had a great job as founding editor of a new city magazine. There were dark clouds on the horizon, however, with the dot-com implosion, and stress lines in our marriage.

Still, when I woke up that morning of September 11, 2001, I had plenty of reasons to be hopeful about the future. The city where we chose to live, San Francisco, has endured a endless series of booms and busts since the Gold Rush Era, and people here know nothing if not how to be resilient.

I was getting ready to head downtown when my wife heard the report of a plane hitting the World Trade Center on NPR. She called out to me to turn on our TV, which was located in my basement office to prevent the kids from exposure to its presumed evils.

Rushing into my office, I left the door open while I snapped on the TV. Our seven-year-old son quietly entered behind me, just as the second plane smashed into the second tower.

I heard his gasp, turned and swept him out of the room. He went upstairs, got a piece of construction paper and drew the image that appears at the top of this post.

It took weeks for life to resume any sort of normal rhythm. Barry Bonds was having the greatest home-run hitting season in baseball history, but all sports contests were suspended for a while.

Tourism came to an end, and with that development, the city slowed to a crawl. There was no one in the restaurants that normally would be packed, and the hotels were empty.

City magazines exist by selling ad space to local businesses. Ours, which had launched literally a week before 9/11, now looked to be dead on arrival. After a series of crisis meetings, the small group of us who had launched it decided we would cut back production to every other month, defer our salaries, and accept trade as opposed to cash for ad space in the book.

That fall and winter and the next spring were extremely difficult, both for the magazine, for the city, and for me. I had to take out a huge equity loan to keep paying the house payments, and all of the strains evident before 9/11 worsened in its wake.

While many dot-com companies had survived the stock market bubble that had started popping in April 2000, now the entire first wave of web-based startups started failing left and right, and it turned into an economic disaster for this region.

Tourists stayed away in droves, and it was deep into 2002 before the core element of the city's economy began a fitful recovery. By then, I had been forced to leave the magazine for a position as a visiting professor at Stanford, where the plan was for me to write a book.

By remembering all of this, I do not wish to imply any causal relationship between 9/11 and the chaos that visited my world, because it's all much more complicated than that. Besides, others suffered far worse pains than I did, including a friend and former colleague whose sister was killed when the plane hit the Pentagon.

But through a series of setbacks, I eventually found myself without that house, without that marriage, and without what until then had been an extremely successful career as a journalist.

I won't chronicle the losses, disappointments, or the many crushed dreams. Many, many people have been struggling mightily in this historical adjustment of the U.S. national economy as it integrates into a global economy where "we" have far less leverage over our economic fate than when U.S. hegemony was clearer, and less under assault from aggressive centers of growth overseas.

But there are many bright spots around here and I post about them week after week. San Francisco is the center of another tech boom, bringing waves of entrepreneurial innovation to the rest of the world, like we always do when on top.

I'm chronicling that boom for the very magazine that I helped launch a decade ago.

The little boy who drew that sad picture on 9/11 is now a junior in high school, and all-city soccer star, and coach of a younger girls' team that yesterday won their opening game, 1-0.

There are flowers blooming in the garden out back, and somewhere way up in an apple tree, I can hear the sweet sound of a pair of birds singing...