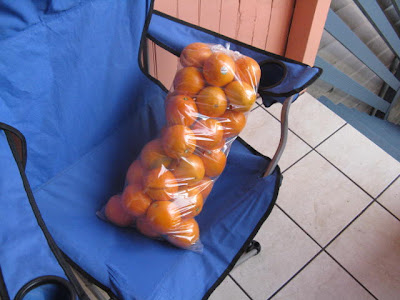 This is the season when the men who have managed to navigate their way through all of the hazardous corridors from their poor countries south of our border to this one end up on the corners of cities like mine selling bags of oranges.

Yesterday, I spoke with one of these men, as he stood in the cold air with plastic bags full of oranges. He was asking for a price of $9, which I decided to pay without bargaining, because I have a sense of how little of that gross price would end up in his torn pocket.

As he reached to hand me the change, I declined to accept it. "Para usted," I said, as I hoisted my bag of oranges over my shoulder and headed home. "Gracias, gracias," he shouted at me as I left.

The real "thank you" that ought to have been uttered was from all of us, here in the richest society on earth, regardless of our present circumstances, to people like him, who come from poverty beyond our imaginings. But we can never find the words to say it, and that is why America, as we know it, will no longer enjoy its privileges in future decades.

We have simply never come to grips with why we are as rich as we are. And that will prove to be the fatal flaw for this society. Until we join with our global brothers and sisters and recognize how we share a common fate, we will continue to wander lost in a desert of our own making...
at February 13, 2009 2 comments:

The most wonderful thing for little Synergy School, which probably has fewer students than any other K-8 school in this city, is that this year, for the first time in its quarter century or so of existence, all four basketball teams made the playoffs.

By tonight, however, only one team was left standing -- the boys' varsity basketball team. The other three -- varsity girls, JV boys and girls -- also had great seasons, but by tonight, other teams had won the championships in their leagues.

So, tonight, was the final game for not only the varsity boys but the whole school. 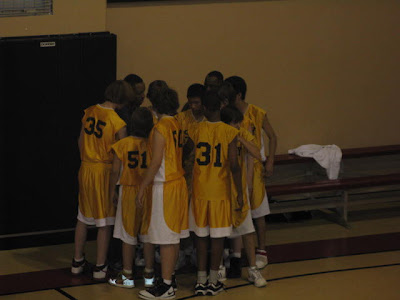 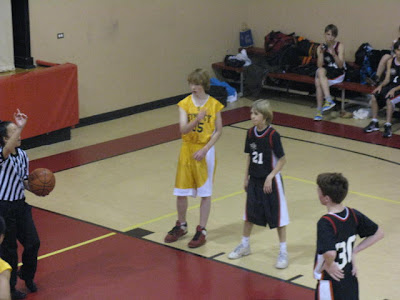 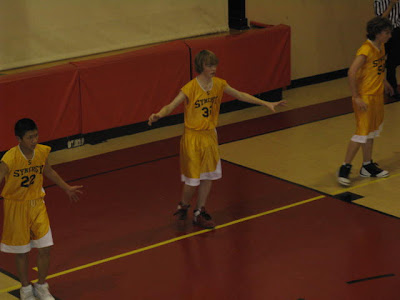 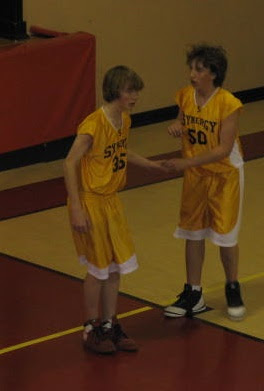 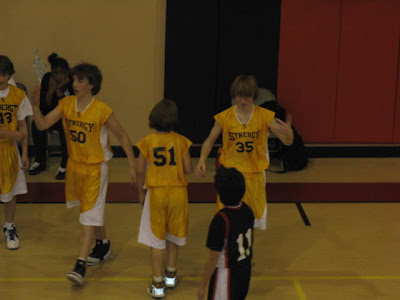 In the end, the varsity boys prevailed in a manner that left no doubt who the best team in their league is. They won this game 45-11.

For the season, they finished 10-0 and won games by an average score of 36-12. Naturally, I am very proud of my own son, who anchored this team, played hurt, and was a leader in every respect.

But even more I am proud of this little school, its coaches, and the families who helped our sons do something that never before has happened in this league in this city. A perfect season! 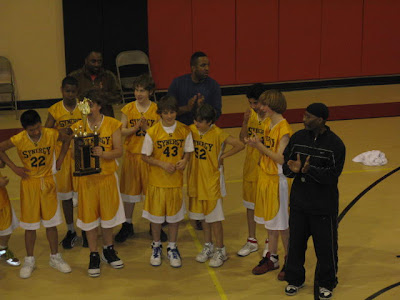 We All Need Angels

Please listen to this song if you are feeling sad, lost, unappreciated, or hopeless tonight. My main goal, as a writer, has always been to offer hope to others, and not to promote the opposite emotions, which can be so destructive.

This particular song has long inspired me to keep going. I hope it has the same effect on you.

I'll never be one to suggest that kids' sports are more important than other aspects of their development. But healthy physical education complements good intellectual and emotional development, so competitive sports have their place. 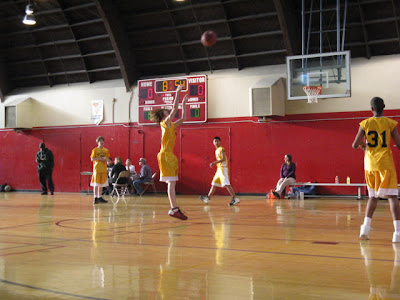 In this context, two of my kids have been standout athletes in their youthful years. My first son was a star in little league baseball, soccer, and track; he also was on the swimming team in high school, is a surfer and a sailor and, at 27, is in perfect physical shape (despite all those McDonald's hamburgers I fed him in years past!) 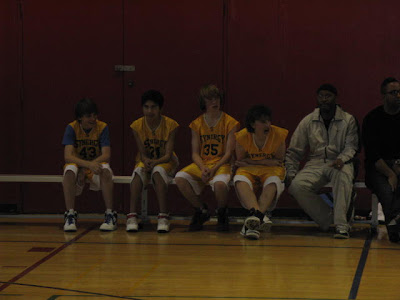 My second son, now 14, has been a great Little League baseball player, a star in soccer and track, and an extraordinary basketball player. Last year, as a 7th grader on his school's varsity team, he had a good year but the team finished 1-8 and missed the playoffs. 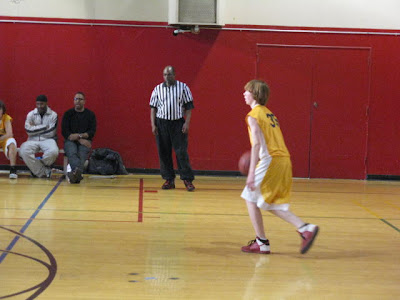 This year he's grown, to 5'11", and he plays center, guard and forward. Primarily he is at the low post on defense and high post on offense. The team is 10-0 and has outcored its opponents by an average score of 34.6-11.9. 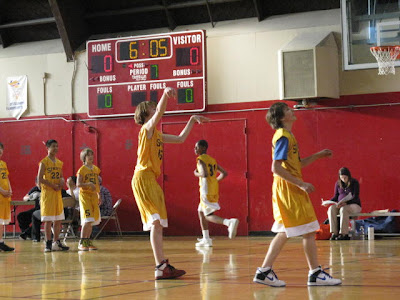 But he missed the most recent game (before tonight's) due to an injured foot. Watching from the bench, he got frustrated as his teammates squeaked out a win, 20-15. I knew by the look on his face that he wouldn't sit out any more games. 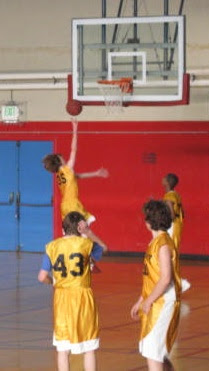 Last night he told me he would be playing tonight. He did. In the first 18 minutes, he scored 10 points, grabbed 6 rebounds, blocked 5 shots, had three assists, had no turnovers and won the opening jump ball, as he has every game since the season began. 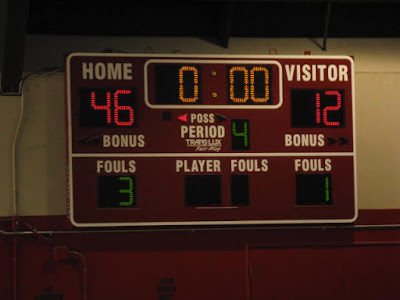 The final score, as captured in this photo by his little sister (potentially a pretty good athlete herself in the future), was 46-12. The final game of this final middle school season for him and his teammates will be Thursday.

The championship. I'll be there. 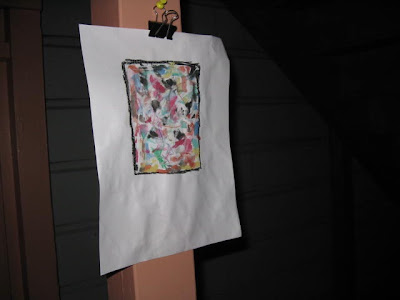 At night, the artist paints.

In day, the singer sings.

At morning the smoker smokes in her robe. Sunlight etches her clearly against the rubble of her cluttered back porch.

The same old man walks his tiny dog. He smokes. "Yuck," says my daughter, as we walk past.

My oldest son stopped by for a visit; walking back from the coffee shop, we speculated about what the real unemployment rate is in California's cities. The state claims 9.3% are out of work, but that's only people who've lost jobs that qualify for unemployment benefits -- perhaps covering most of the jobless but certainly not all.

We came up with an estimate that the actual percentage of unemployed is about 14-15%.

There are other problems that the numbers don't capture. Some workers have been cut back to half-time. They consider themselves lucky, given the environment, for having any income at all.

Meanwhile, the song-writer composes, the new Mom walks her baby, the drug dealers are in hiding after a recent raid. A young athlete, with an injured foot, decides to suck it up and get himself into the playoff game tonight.

The blogger stares at an empty screen, marveling at the times when he thought he any say at all over any of the things around him.

Because it is dreadfully clear now that he didn't, and he never will. All he has are words -- or not -- depending on the moment.