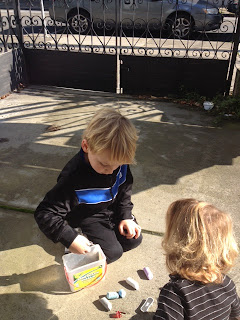 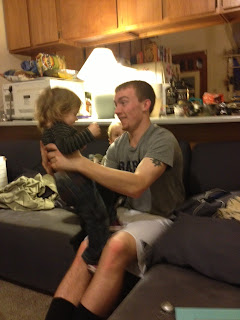 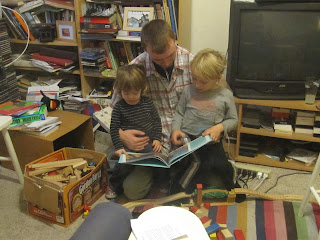 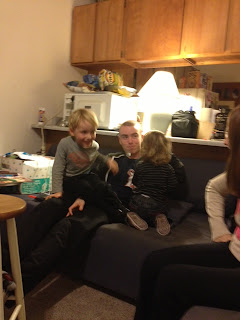 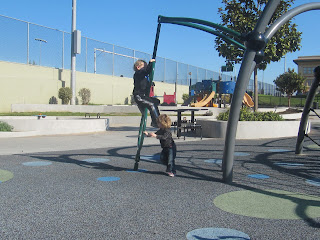 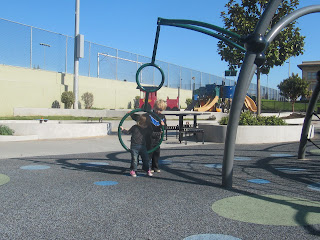 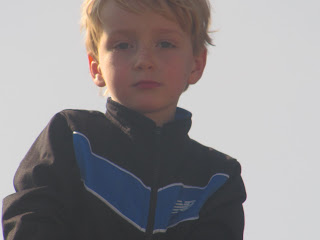 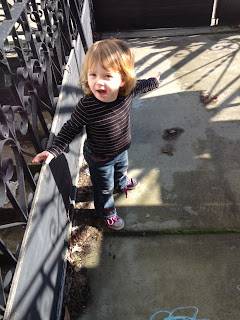 The day in photos: grandkids and uncles. I have a regular schedule now caring for the two little ones. Sophia, not yet two, trusts me and is able to spend hours away from her mother without complaint.

Besides chalk-drawing and a trip to the park, there was plenty of indoor time, building, drawing, playing with model cars, the train, reading, eating, and a good deal of jumping.

Luca, who is four, has become adept at searching all through my cluttered apartment, locating new (old) toys, lost memories, reminders of times when things were different here.

Some of what he unearths is disconcerting, reminding me how quite recently my life was so much different than it is now.

I quickly dispose of some things, place others out of reach, and encourage him to play with the rest.

There are so many notes, bags, pieces, fragments from many lives lived here: parts of two marriages, three girlfriends, six kids and more recently of all five grandchildren.

Through it all, the only constant is me, the old, old man, feeling ever older day by day.

Memories are fine if you don't have to be shocked by their clarity. Memories are fine except when you know the other custodian of a mutual memory no longer knows, cares, or even, most shockingly, chooses not to remember at all.

Such is the uneven cruelty of how we all move on, each at our own speed.

But I, I remember everything.

As I walked around downtown San Francisco today, the skies opened and a downpour ensued. It occurred to me that the writer in me loves the rain but I normally prefer to write about the sun. Or maybe that is just in my imagination.

For years, I spent so many years walking along beaches and rivers, watching the waves and the currents, the birds and the crabs, the fish, so many fish, and mammals, occasionally glimpsing seals, sharks, even whales, often seeing Rainbow trout, panfish, large edible trophy fish, you name it.

I've been to beaches in Tahiti, Australia, Malaysia, India, Costa Rica, Mexico, Canada, all over Europe and along both coasts of the U.S.

Occasionally, I've seen an eagle far overhead along a river. I've seen people ride canoes and rafts and air mattresses down rivers. I've done these things myself, and capsized on occasion.

The sound of water is energizing to me, except when it leaks, drip by drip, through the roof or ceiling of where I am staying. On the other hand, staying overnight in the mountains of Indonesia, in the equivalent of a treehouse, is a memory I treasure. Raindrops falling nearby but not catching me.

It's a rainy day in winter here. I'm home now, warm and dry. And all I can write about or dream of is the sun. I have not been to a beach or a river in years. Making such visits alone no longer appeals to me.

Who knows. Maybe this year I'll start it up once again. Or maybe I'll just write about it, recalling the past with more vividness than any future hope could achieve. The future is hazy, like a cloud that engulfs me.

The past? I remember the past, better than anyone who lived through it with me. Especially under the sun. Of that, and only that, I am certain. 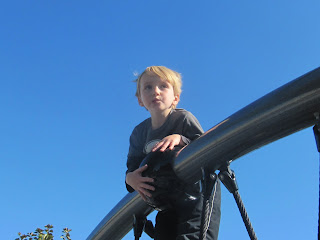 I am taking care of my grandchildren more frequently these days, now that paid work has slowed to a trickle. If money were no issue, this is probably what I would choose to do much more than I have been able to do in the past. That and stay attentive, day to day, to my teens and their lives.

What the generation once removed from their parents has to offer to our young ones is something that some social scientists believe is almost completely responsible for human progress. Until recently, none of us lived long enough to be relevant.

For my grandchildren, it is my penchant for collecting things, so far. My collections of pennies, stones, seaglass, photos, books that seem to most attract them. Perhaps in future years, if I am here, it could start to be my stories and writings.

Truly, I am clueless. When I look in the mirror I see only an old man, whose dreams have much more often been dashed to bits than realized. I am not bitter, so I hope that does not sound bitter. But life has not exactly measured up to what, even a few years ago, I'd hoped it might.

That's just me. And this is about them, the young ones.

In his speech today, President Obama talked about global climate change. That will affect my kids and their kids far more than any of the other political issues now so controversial in Washington, D.C.

Well done, sir. Now please do something about it.