Tonight, I had the extreme pleasure of attending an event where a non-profit organization I co-founded 35 years ago was awarded a "genius grant" of $1 million by the MacArthur Foundation.

To the three of us who created this NPO so long ago, when we were all poor, young, and hopeful, this outcome is something we never could have imagined.

It's called the Center for Investigative Reporting. Check it out. I hope it lives on many decades into the future, and given the brilliant leaders and staff it now has in place, I'm betting that it will. 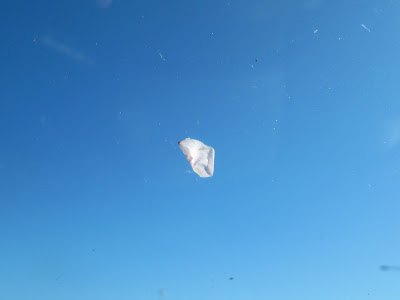 Where I parked my car late last night, though it was too dark to notice, was under a plum tree, one of many in bloom here nowadays. When I came out to drive it today, the car was covered with pink blossoms.

As I drove out of my neighborhood, they flew off and spread on the winds. Only as I cleared the Bay Bridge into the East Bay, did I notice that one tiny petal was clinging on for dear life to my windshield, unwilling to leave its perch just yet.

In this way, one tiny piece of a San Francisco tree traveled 15 miles east and north today, to what purpose I can only guess, but apparently part of nature's plan. 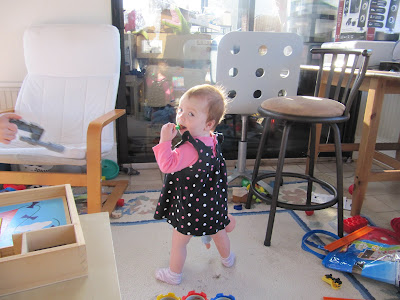 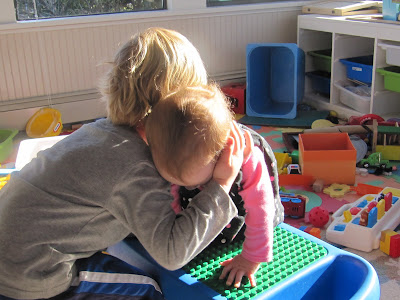 The rest of my day was devoted to taking a break from work affairs to care for my three-year-old grandson and his little sister, who's ten months old. She's walking and proud of it.

He's as imaginative as ever.

During one game he invented, that went on for over two hours, we explored some mysteries.

First, he noticed a long, thin cloud in the sky that might be interpreted as looking like a line, or a snake.

Was that a hint of the mystery?

He pulled out a block and said it was his phone.

"It's a phone to help solve mysteries."

I built him an advanced radar system out of Tinkertoys (yes, they still build those) and we calibrated them in such a way that we might pick up signals from afar.

"I hear strange sounds from far, far away," he reported.

These sounds at first might have been from dinosaurs or other creatures, but ultimately, it turned out, they were coming from France, because the radar slowly was picking up words spoken in French.

Meanwhile, new snake clouds appeared in the Western sky, some of which were part of the overall mystery, others the clear results of jets flying far overhead.

Now, while we never did resolve this particular mystery, we both agreed it had been a pretty good day, a day we decided to rename Mystery Wednesday."
at February 15, 2012 1 comment: 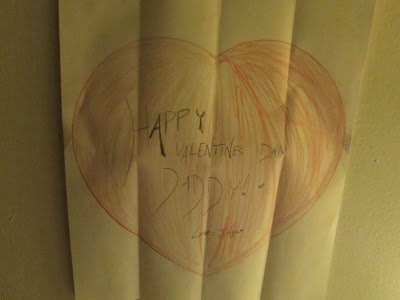 I got a card today, one wish from one very special person, aged 13. Which confirms my recent posts about what love is all about. A daughter is so much more loving, in an enduring way, than any romantic partner.

I have reached an age where I reject all notions of romantic love, based on my experiences in life. I just can't believe in it anymore. It makes nice movies, it fuels novels, and songwriters like to pretend it exists, but it is a total and complete lie.

Romantic love does not exist, in my view. There is nothing enduring about it, at least in our age and in my culture.

But the one type of love we can count on is that from our children. They know how we feel about them, and they return those feelings, even as we grow old, ugly, and increasingly absent-minded, confused, and slow of step and mind.

Random Moments on a Rainy Day

My grand-daughter, Sophia, has started walking, one step at a time, at age ten months & two weeks. She is definitely one of those kids to keep an eye on. Always very alert and observant, with a mind very much her own.

Her big brother (age 3) was telling me about her accomplishments on the phone today.

As my 15-year-old and I were driving back through the Sunset toward our side of town today, after a soft rain and as a bright sun emerged, we both caught our breaths: A rainbow, one of his (and my) favorite sights.

After we picked up his brother and proceeded closer to Bernal, he noticed that a passing bus was displaying a message in the space where the bus line number usually appears saying "Please Call Police 9-1-1."

I pulled over and did so. No word on what that was about.

I applied for Medicaid today and joined AARP. Not afraid to admit it: Decades have passed, and it is time to accept that I am officially old, at least physically. Good news is my health insurance bills should be cut in half, and I may even receive better coverage in return.

Maybe it's not so bad to be old. Next I have to investigate social security...

My homeless friend, Gonzo, and I were speculating earlier today whether rain was headed our way on this Sunday of a very dry winter. In fact, it's been so dry, and sunny, that the fruit trees in this end of town all simultaneously broke out in beautiful pink blossoms a week or so ago.

I'm sorry to not have a photo to share with you; I'll try to add one soon.

As my neighbor Pete noted, it's a reminder of how powerfully established the animals and plants native to this area are compared to us, the mere builders of concrete, steel, and plastic structures.

That being their collective knowledge to bloom all at the same moment.

One moment there were no blossoms; the next they were everywhere.

Time for the youngest coach in these parts to get his license. That is an arduous process, for a teenager. He had to sacrifice not only his Friday night for three hours of indoor instruction, but six hours of his Saturday for outdoor instruction.

By the end of the latter, the 40 or so new coaches were scrimmaging. He was by far the youngest of the group -- everyone else twice or three times his age.

Not a problem for him on the pitch -- he ran circles around the others, including a number of very good soccer players from Brazil, Ireland, Mexico and England. Age, as I've often noted, is cruel.

The young are faster and more lithe than any of the rest of us can even hope to be. While I watched, Aidan scored three goals to lead his squad to "victory."

Back and forth, all over town, I drove the kids here and there, there and here. Dylan to see his friends, all of whom ended up spending the night here last night. Julia to a sleepover birthday party.

Me, late on a Sunday night, I'm watching stupid romantic movies that in no way reflect the real world. My latest post denounced the concept of romantic love, which I do not believe in.

This post, however, is about family love. That is the kind I can believe in. Luckily, I do not need to deal with any faithless "girlfriends" this coming Tuesday, the most disgusting "holiday" of the year.

Because my kids will be with me, and they will love the chocolates I give them. And I will love the smiles they show me. And because our love for one another is forever.