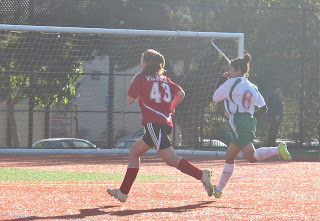 Watching my daughter play defense tonight, as our weather suddenly turned into the local version of freezing (wind chill in the low 50s, probably), I continued to appreciate what a competitor she is.

Several times she made clean tackles, using her size and strength to send opponents to the ground. In one case, the girl on the ground tried to kick her repeatedly -- an illegal move.

The referee didn't see it, but her teammates did.

One of her friends said afterward, "That made me so angry."

"Did she actually kick your legs?" I asked Julia.

This girl has bruises up and down her legs, from soccer.

But as all competitive athletes know, after a physical game like today's, none of that matters.

What I am about to write will not be startling to anyone who monitors the responsible national media, but it may come to a shock to those caught up in the echo chamber of the radical right.

Despite a lousy economy, which normally dooms an incumbent President, Obama won largely because Americans as a whole like him and trust him.

Part of the reason they like and trust him is he is bi-racial. Never forget he is the first non-white President.

Romney, meanwhile, looks, sounds and acts like every other President before Obama. We are, as a people, just tired of that same-old. (That's why I didn't run. :) I don't look right.)

This is not trivial. This is a diverse nation, teeming with people of all races, nationalities, sexual orientations, religions, lifestyles, and hopes for the future.

It's not that minorities and women and gay people or those of us who sympathize with those demographic segments want to vote for people who look or act like them -- far from it.

We just don't want to vote for people who don't get what this is all about.

White men, in fact, have a major positive role in this new coalition, but not if they are the type who tacitly support those idiots who tolerate or rationalize rape, racism, or are so poorly educated they don't know a socialist from a centrist.

Obama won because he is the most appropriate leader for the U.S., circa 2012.

This is an electorate trending toward same sex marriage, legalizing pot (personally, I'm ambivalent on that one), and embracing diversity.

We do not have romantic notions of how hard it will be to build a new America, one that reflects and celebrates our many origins and orientations. We know there is a tribal instinct where people of one stripe tend to hang together.

But we also know our future depends on getting along with one another and recognizing our common humanity.

Finally, we know that climate change is real, and we were grateful the President mentioned it last night, now he has been re-elected.

This, not "socialism," is the great common threat we face. Obama may now be able to do something about that. I hope so. That is the one of the main reasons he got my vote, which I cast on behalf of my 11 children and grandchildren. 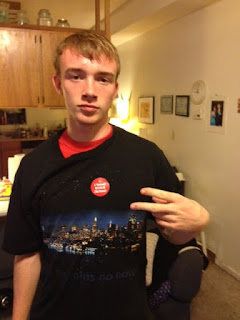 Despite all of the slurs, the racism, and the ridiculous rhetoric about "socialism," this centrist, moderate political leader is the best leader for this country in these times.

My 18-year-old voted for him, and I trust in my son's judgement. After all, the future is much more important to him than it is to me, as he will be here for it and I will not be.

Barack Obama gave one of the greatest closing speeches I've ever witnessed in Iowa tonight. It was inspirational. It will echo across America, I believe.

What is touching is that, win or lose, this was his last political speech. Way too soon, win or lose, his career as a politician is now over.

That's what politics in America has come to. A few years on the national stage. Then over and out.

That is how we treat our brightest hopes. All I can say to my relatives and supposed friends who oppose Obama, is 'Shame on you!'

Obama will win. Those of you who opposed him need to re-examine your true values. What is it, exactly, that you believe in?

Please let me know, because I am very, very disappointed in you, so much so I don't think you can honestly call me your relative from now on without a true, honest explanation.

I'm excited that my 18-year-old can vote tomorrow.

Here is my latest analysis of polling data and trends.

In the Senate, I'd assumed the Democrats would lose a seat or two or even three, but now I predict they will maintain their current 53-47 seat advantage.

(One of the better sites to evaluate the Senate races is this one.)

I've not done any detailed analysis of the House races because simple math dictates that only with a massive sweep at the top of the ticket, which is not going to happen, could the Democrats take back the House from the GOP.

So I doubt my local Congressperson, Nancy Pelosi, is going to once again become Speaker of the House.

Perhaps in 2014, however, given how the right is trending.

On to the Presidency.

Here is a site that reveals just how close the race may be.

Probably the best journalistic assessment on how tomorrow's electoral map will turn out is here, and that indicates Obama within 27 electoral votes of a victory.

To accomplish that, he has 89 in play. The largest prize is Florida. If Obama wins there, this election is over.

But he can lose that and still prevail, which is why his campaign has largely ceded Florida to Romney.

The odd thing is, when I look at this closely, is the demographics of Florida are such that Obama could easily win the state tomorrow, mainly on the strength of Latino votes.

His campaign may sense that also.

This brings up a scenario no one is talking about anywhere on the political web or social media that I have been able to locate.

What if Obama wins in a landslide tomorrow?

If Latinos carry Florida for the Democrats, Obama will also win most of the other states in play, and beat Romney by as much as 332 to 206.

The popular vote would still be close but a good guess of that would be 52-48 Obama, which is my best guess as of now.

I have to get out my calculator, monitor more polls, and study more history before I can finalize these predictions.

But tonight I sense we are on the verge of some sort of big surprise, and that it is not the one Romney supporters may be wishing for...

One good thing about being among the long-term unemployed is I can study the election polls and do the math. Here, from a completely non-partisan perspective, is what I see as of this hour. This is not what I hope will happen but what, as of now, I believe will occur. This is completely subject to change. I will try to update these numbers tomorrow, on the eve of the election. As of now, here is what I see:

I've spent the past couple hours pouring over all the polling data I can find state by state in the 8 states that appear to still be in play. It is actually maddeningly close and therefore uncertain in most of these places, although I would say it is trending Obama in most of them (details below).

Before those 8, it looks like Obama is ahead in electoral votes, 237-206. The only way that number could change is if the five states that appear to be settled should pivot dramatically in the last 48 hours. Those five are Michigan, Pennsylvania, and New Mexico (41), which would have to move away from Obama, or if North Caroline and Arizona (26) move away from Romney.

Looking at polling trends I am going to assume neither of those scenarios will occur.

So that leaves 8 races in play:

I believe this is the best case scenario for Romney. A more likely outcome is 294-244, Obama.

I will redo this math tomorrow... 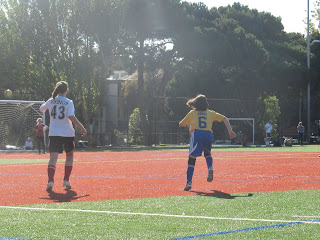 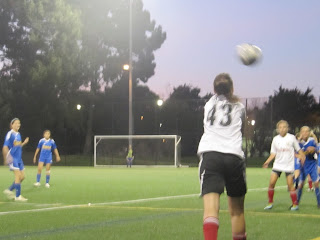 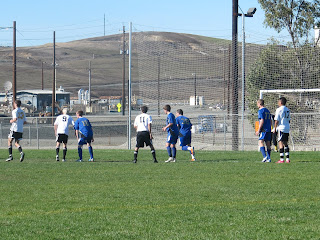 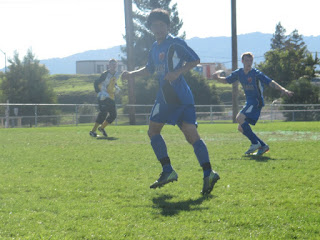 The kids didn't win any of their games but their parents were out there cheering the whole time.

In the process I may have lost my writing voice. We'll see.

Although by the numbers I've been predicting Obama will win on Tuesday, the truth is no one can say for sure how this election will turn out. It is very, very close.

Polls indicate the overwhelming number of people believe Obama has done a great job of handling the disaster relief for Hurricane Sandy, so that may provide him a slight edge.

But the difficulty of getting to the polls in hard-hit New Jersey and New York, Democratic strongholds, could well depress the popular vote on that side. It will have no impact on the electoral outcome.

This my 18-year-old's first election. It's difficult to talk with your kids about politics these days. They see all the ugliness, the hyperbole. They are smart, and have studied history.

They know about our legacy of racism in America. They know what socialism is. To see grown men and women call a moderate, centrist Democrat a "socialist" strikes them as ludicrous, and it forces them to lose all respect for the entire Republican Party as a result.

My father's party is thus losing our brightest and most perceptive youth, They also are suspicious that all of this baseless rhetoric has at its core a racist tinge. There is no policy or political reason for any white voter to "hate" Obama, nor is there anything about his mixed racial heritage to justify those venomous emotions.

In other words, if you hate Obama, you do so not rationally, but out of an ugly place within yourself that you ought to be able to address through your religion, or through therapy, or through plain emotional honesty.

There simply is no rational basis for that kind of hate.

Not really. Why should they? You don't hear that kind of ugly venom from the center or the left, only from the right.

That's why the right wing remains a small but dangerous pocket of extremism in this country. Don't forget where the worst domestic terror attack originated -- at Oklahoma City by a right wing extremist from Michigan.

Hate is the worst thing in public life. At its core is unresolved racism.

There's plenty at stake in this election, although a much higher stake globally sits in the government change imminent in China.

Way to the east of here and back today I drove one of my son's teammates. He is also a center back; they played side by side and were brilliant as first time teammates.

The boy's name is Juan and he is built like a fire hydrant. He told me in broken but pretty good English that he grew up in Honduras and moved here six years ago. He only started learning English then.

He said he chose his high school over others because he wanted to learn how to be around other people than just Latinos.

He said he likes it here in San Francisco, and he likes getting to know white, black and Asian kids.

Despite his formidable physical bearing, which translates into an intimidating force on the pitch, he is a sweet kid, and he reminded me why America is a great country.

Love will conquer hate eventually; I believe that. And hopefully Obama will be re-elected on Tuesday because all of our people, even the haters, need that.