A Visitor to a Barren Yard 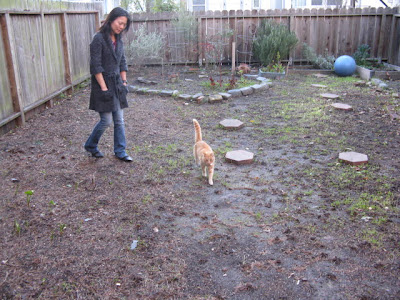 Our favorite neighborhood cat, Oliver, stopped by today just in time to cheer up my friend as she was feeling down in the dumps. It's a bummer to be sick during a holiday, but sick she is, with a fever and body pains.

A planned road trip hangs in the balance. Will we actually go or not?

The city is emptied of many residents, who are traveling for the holidays. This includes all of my children, three of whom are visiting the mountains of Oregon and three of whom are sunning on Sanibel Island in Florida.

Here, an unknown miscreant is breaking into our cars at night. My car was hit Monday night, my Chinese neighbor who smokes on her back porch awoke on Christmas to find her car's driver side window smashed in, the hood sprung, and anything she might have had inside gone. Her Dad told me another neighbor's car window had also been broken recently.

As I am care-taking my second ex-wife's car for a few days, I've been parking it directly outside my bedroom window at night, alert for any sign of trouble. Last night, I woke up periodically and went outside. Once, I spotted a suspicious fellow who seemed to try to shrink from my stare.

I came back inside, but stayed at the window. A few minutes later, this man passed quickly, pushing his grocery cart of recyclables. That, to my mind, makes him an unlikely suspect in this wave of break-ins.

Later, during a rather feverish night, I had to fight off some bad guys in my dream. Somehow, I managed a muffled roar and a vicious punch to the face of the main leader, and then awoke to the painful reality that I'd smashed my right fist into the metal headstand of my bed.

How do you know if you have a broken knuckle? Is the swelling, discoloration, and a moderate degree of pain significant? I doubt it.

Meanwhile, in Japan, one of the most intriguing developments in recent years has been the rise in popularity of the "cell-phone novel" genre. These keitai shosetsu are typically written by very young women entirely on their mobile phones, and published under one-word handles.

The actual identities of the authors remain mostly unknown. Their stories concern love and loss, tragedy and recovery, betrayal and resolution. They are written interactively, i.e., a girl will start posting her "diary" on a site called "Magic Land," where many others read it and urge her on.

These novels are becoming so popular that eight of the top ten selling novels in book form this year are republished keitai shosetsu.

Each of these tales is divided into short, tantalizing excerpts -- the typical post takes about three minutes to read, which is also the average time between stops on the Japanese train system. But this new literary form is heavily criticized by the entrenched book publishing industry in Japan, which prides mastery of the much more traditional forms of Japanese writing, even though it remains male-dominated and out of reach of all but a small group of intellectuals.

In this way, the keitai shosetsu represent a revolutionary literary development in a land where women remain oppressed in ways Americans can barely imagine.